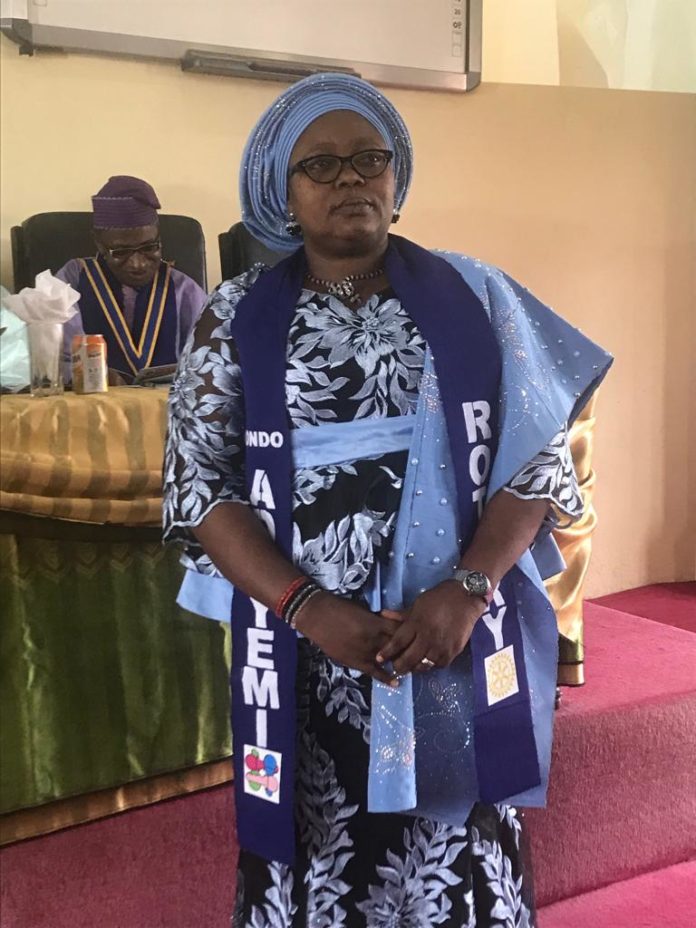 The Rotary Club of Ondo, Adeyemi College of Education Ondo, District 9125, has investitured a new President, she is Rotarian Oluseto Abidemi Olatuyi.

Olatuyi, who is currently, a Deputy Director of the Directorate of Information and Public Relations, Adeyemi College of Education Ondo, assumed the new position as the 7th President of the body, at a colourful ceremony, held in the institution on Saturday October 19, 2019.

In an address delivered on the occasion, by the Chairman of the ceremony, Mr. Olagunju Bamidele Jonathan, an Engineer, he described the event as unique and lauded Rotary Club for providing humanitarian services to the needy across the world.

While stressing the need for other humanitarian organisations, to emulate the club, Olagunju said the step would go a long way, in providing succour to the less privileged, and make the world a better place.

He extolled the virtues of Mrs. Oluseto Olatuyi, the new ACE Rotary Club President, describing her as an astute, hardworking, humane, generous and visionary personality.

While reiterating his readiness to continue to support her, Olagunju appealed to members of the ACE Rotary Club, not to relent in offering selfless services, to members of the College community, and less privileged individuals in the society.

READ ALSO: Lecture: Putting The “Publics” Back In Public Relations Practice in Nigeria By Bisi Olawuyi

Also in her address after investitured, Olatuyi described the occasion as milestone, and thanked two members of the club, Rotarians Bose Olanusi and Mayokun Akinkuoye, for encouraging her to join the humanitarian organisation.

She acknowledged contributions made by leaders and of members of Rotary Club, Adeyemi College, to its growth and advancement, stating that their commitment and tenacity, has contributed positively to the achievements recorded by the association.

Olatuyi also thanked ACE Management both past and present and most especially the incumbent Provost, Dr. Samuel Akintunde, for his sterling leadership qualities and creation of enabling environment which assisted the club to thrive”.

Highlighting some of the achievements recorded by the club since it’s foundation in the College in the last seven years, the new ACE Rotary President, listed them as including the provision of borehole at Adeyemi College Primary School and planting of trees at Adeyemi College of Education Demonstration Secondary School.

Other activities listed include sponsoring of staff for ICT training, sponsoring of students for RYLA programme, payment of school fee of indigent students, provision of laptops, scanners and crutches to students with special needs as well as the initiation of award to best physically challenged graduating students in the College.

While emphasising the need for financial support from public spirited individuals, Olatuyi said the gesture would enable the club to provide more assistance to the needy.

Earlier in a lecture presented at the occassion by Prof. Tomola Obamuyi, he stressed the need for collaboration between the Government and humanitarian organisations in the task of improving standard of education in Nigeria.

Speaking on a topic entitled : ” FUNDING OF EDUCATION : THE ROLES OF HUMANITARIAN ORGANISATIONS”, the Federal University of Technology Akure (FUTA) lecturer, while quoting the United Nations Secretary- General, Antonio Guterres, described Investment in Education as ” the most cost-effective way to drive economic development, improve skills and creating opportunities for young men and women”.

He spoke on the state of education in Nigeria, and bemoaned what he observed as poor allocation to education sector, by successive administrations in the country, stating that the development has affected it’s growth and development.

The former Dean, School of Management Technology, FUTA highlighted important roles of humanitarian organisations in funding of Education in Nigeria, stating that the call for them to lend helping hands to has become imperative in order to lessen the burden of its funding by the government.

His words: “It is crystal clear that the government cannot fund education alone, and that education institutions all over the world thrive on philanthropists to complement government efforts”.

While commending Rotary Club for its involvement in six key areas such as education and literacy, disease prevention and treatment, maternal and child care, water and sanitation as well as community development, peace and conflict resolution across the world, the University lecturer, however, urged the globally acclaimed humanitarian organisation, not to relent in its activities saying poeple are a are looking forward towards it ” for the achievement of a better world”.

He, however, charged membership of Rotary Club in Ondo State to do more on publicity, stating that the move would keep people abreast of their activities.

Similarly, he advised the incoming president of Rotary Club- Adeyemi College of Education ” to continue to think outside the box” by seeking more support from philanthropists and donor agencies to ameliorate ” current infrastructural deficit in the education sector in Ondo kingdom”.

The highlight of the ceremony which held at the New Centre for Educational Technology building in the College, was the installation of the president by his predecessors in attendance such as Rotarians Kehinde Adenegan, Justina Ogboru, Mopelola Akintoye and other assistant governors.

Others present were members of Rotary Club of Ondo as well as their counterpart from Akure, members of the Nigerian Institute of Public Relations, Ondo state; Catholic Women Association from St. Patrick Catholic church Ondo, staff of ACE from various units and Departments as well as family and friends of the new ACE Rotary club president to mention but a few.