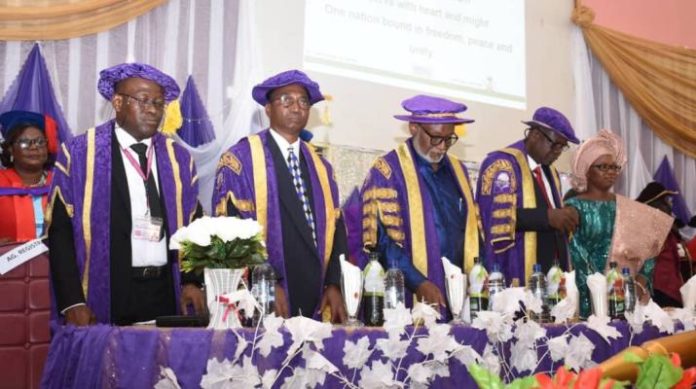 ...Honourary Awardee to Give Scholarships to 30 Students

Ajakaiye graduated with a CGPA of 4.76 from the Accounting Department, Faculty of Social
and Management Sciences of AAUA.

Governor Akeredolu, who announced the immediate employment while delivering his
address on the occasion of the 9th Convocation ceremony of the University, said the best
graduating student deserves to work in the institution to enable him contribute his
knowledge to the growth of the University.

The governor explained that the state was managing three Universities and a Polytechnic,
assuring that his administration would continue to exert necessary efforts to sustain the
tempo of development in all the State-owned citadels of learning.

A total of 3, 804 students graduated from various Faculties and Departments of the
Institution, out of which 20 graduates earned First-Class Degrees.

Akeredolu disclosed that his government has also done its best to grow the physical
infrastructure in all the state-owned institutions.

He said, ”As part of our administration’s understanding of the running of a 21st century-
compliant university, we have continued to give the management of all state-institutions
the free hand needed to run their affairs.

“Plans are on to ensure that we leverage the research efforts of academics across our
institutions, while also not failing to tap from their wealth of experience and research when
occasions demand.

“Our educational policy thrust is clear, to make our institutions of higher learning
independent and well-funded with a view of making tools of positive changes in the
society.”

The Governor noted that with the 20th year of the existence of AAUA, it has continued to do
exceptionally well nationally and globally despite its young age.

“Within such a relatively young age, AAUA has consistently emerged as the Best State-
owned University in Nigeria, and it is currently ranked the ninth best out of the about 160
universities in the country”, Akeredolu emphasised.

Meanwhile, the governor also commended the Vice Chancellor of the Institution, Prof
Igbekele Ajibefun, for a job well-done and for taking the Institution to a greater height.

The Governor said the Professor of Agricultural Economics, whose tenure as the 5th
substantive VC of the University will end three weeks’ time, would be leaving the Institution
better than he met it five years ago.

Governor Akeredolu said, "I want to commend Prof. Ajibefun for doing the state and the
University proud. On behalf of the people and government of Ondo state, I want to
congratulate him for a jobs well-done and for taking the University to the pedestal of its
highest ranking since its existence in Akungba 20 years ago.

“Today AAUA is rated the Best State University in Nigeria, number 9 out of almost 160
universities in the country, and number 81 in Africa. That must have taken lots of
hardworking and efforts as well as the support of other members of Management of the
institution.”

Earlier, Prof. Ajibefun had thanked the State Government, the Governing Council, and
members of the University Management, for their cooperation and support that made it
possible for him to achieve his vision for the university.

He said his greatest achievement was taking the University to the unprecedented height of
retaining the Best State University status, as well as taking it to the number 9 spot in
Nigeria.

He charged the graduands to be good ambassadors of the University and give back their
alma mater.

In the meantime, the sole recipient of AAUA’s Honourary Award at the 9th Convocation, Mr.
Segun Olugboyegun, while responding to the Honoris Causa, Doctor of Business
Administration, conferred on him by the University, promised to grant scholarships to 30
students of the university, beginning from the next academic session.