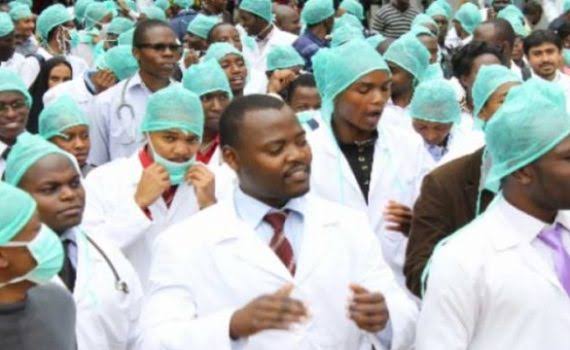 No fewer than 200 health workers, including doctors, pharmacists and nurses working with the University of Medical Sciences Teaching Hospital Complex (UNIMEDTHC) on Monday staged a protest, marching through the city of Akure, Ondo state capital over unpaid salary arrears.

The workers, carrying different placards highlighted the fact that the state government is owing them two to four months salary arrears.

The health workers, who converged at the UNIMEDTHC, Akure, matched to through the popular NEPA roundabout before heading to the governor’s office.

The workers, hinted that from today (Monday), they will down tool until their arrears are paid.

The workers were met at the governor’s office by Secretary to the state government, Hon Ifedayo Abegunde and the state commissioner for health, Dr Wahab Adegbenro.

Speaking on behalf of the doctors, Dr Olagbe Taiwo appealed to the governor to consider their plight and pay the salary arrears.

Responding, both the SSG and the commissioner appealed to them to return to work, promising that they will deliver their message to Governor Akeredolu.