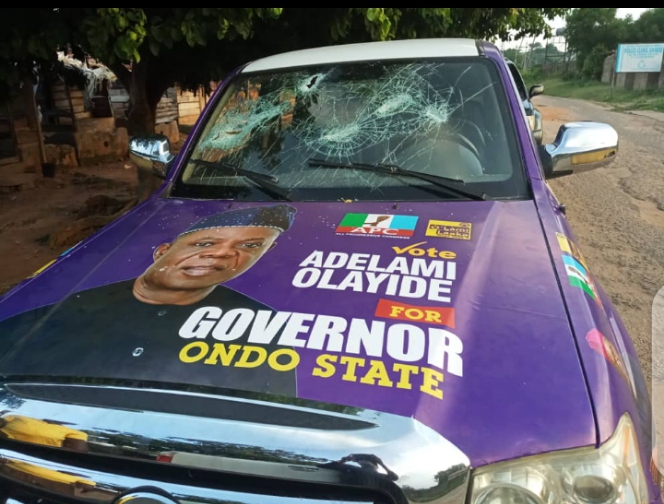 Political thugs have caused mayhem on Owo as Engr. Musa Mukaila, a chieftain of the All Progressives Congress, APC and staunch supporter of Chief Olayide Adelami, a governorship hopeful in the Ondo October 10 polls was attacked on Friday.

He was returning from the police station to make a formal complaint about an earlier attack on a campaign vehicle branded for Chief Adelami.

Eyewitnesses say the vehicle parked in front of a barbing salon beside RCCG, Success Parish, near Adaba junction, Idasen-Owo, was destroyed by the political thugs, who shot sporadically into the air to scare away people.

Reports say thugs have been moving round Owo in recent times with guns and other dangerous weapons unchallenged.

They are suspected to be sponsored by another aspirant.

A statement from Chief Adelami campaign organization noted that the aspirant is reputable for peace.

“He has instructed that the matter be reported to the police and a complaint was immediately lodged at the A-division of the Nigerian Police, Ijebu-Owo, while the vehicle has been towed to the facility”, the statement read.