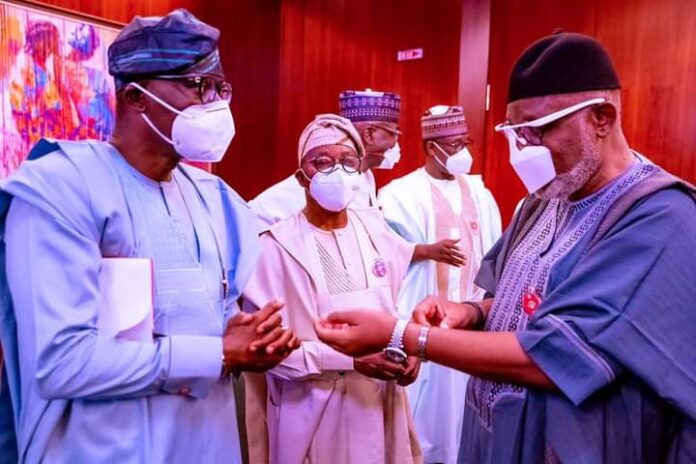 The planned address of a joint session of the National Assembly by President Muhammadu Buhari on Thursday over the worsening security situation in Nigeria now appears uncertain.

This situation followed the antics of the governors of the ruling All Progressives Congress (APC) at the party’s National Executive Council meeting held in Abuja on Tuesday.

Governor Rotimi Akeredolu of Ondo State, who moved the motion for the cancellation of the President’s planned address, reportedly cited a possibility of unnecessary immitations of such invitation by state assemblies nationwide. He was quickly supported by Governor Yahaya Bello of Kogi and other colleagues.

On December 1, after a riotous debate on the floor of the House of Representatives, members unanimously endorsed a motion of urgent national importance by a representative, Satomi Ahmed.

The motion had sought the appearance of the President over the recent killings of farmers in Borno State.

The attack by Boko Haram on November 28, on mostly rice farmers in Zabarmari, a community in Jere Local Government Area, saw at least 43 farmers killed. More than a dozen are still said to be missing till date.

The incident immediately sparked local and international outrage, with many Nigerians calling for the resignation of service chiefs and even the president himself.

The development has also been cited as one of the reasons for the renewed protests by young Nigerians across some states, who are demanding the resignation of President Buhari.

But in its response, the upper chamber of the National Assembly simply called for the removal of the service chiefs. It was the third time such demand was made by the red chamber.

President Buhari also condemned the attack and sent a federal government delegation to Borno to condole the state government.

President agreed to address assembly
Meanwhile, less than a week after the summon was made, Mr Buhari agreed to address the joint session of the two chambers on the issue of Boko-Haram and the general insecurity across the country.

PREMIUM TIMES on Monday reported the confirmation by the Presidency that the session had been set for Thursday.

The Speaker of the House, Femi Gbajabiamila, had earlier told journalists that the president had agreed to appear before the House, saying the date would soon be made known to Nigerians.

“We have agreed on a date and he will meet with the House to address the situation. We have fixed a date but we will communicate with you,” he said.

When contacted, a spokesman to Mr Buhari, Garba Shehu, said, “The President will address a joint session of the parliament.”

Ahead of the APC NEC meeting, the governors of the ruling party had earlier held a meeting on Monday evening to debate the agenda of the NEC meeting.

At the meeting, PREMIUM TIMES learnt the governors resolved to advise Mr Buhari against appearing before the National Assembly over the security situation in the country.

Their argument, this newspaper learnt, was that such appearance by the president might create a precedence that state assemblies could capitalise on to frequently summon Governors in like manner.

They also reportedly resolved to pursue the agenda by moving a motion for its suspension during the NEC meeting.

True to their plan, the Ondo State Governor, Mr. Akeredolu, moved the motion and was supported by other governors in attendance.

The NEC subsequently endorsed the decision and mandated the governors to engage the assembly members from their states for proper briefing and interaction.

Indications have now emerged that the governors have scheduled a meeting with National Assembly members. It is, however, not yet clear what the composition of the meeting would be.

It is unclear if members of opposition parties at the National Assembly would be invited and what would be their position on the sudden change in plan.

Efforts to reach Yekini Nabena, the national deputy spokesperson of the APC, to comment for this report was unsuccessful as he neither picked his call nor responded to a short message sent to him.

It was the same outcome when Presidential spokesman, Garba Shehu was contacted. He also didn’t pick his call and was yet to respond to our reporter’s message as of the time of filing this report.