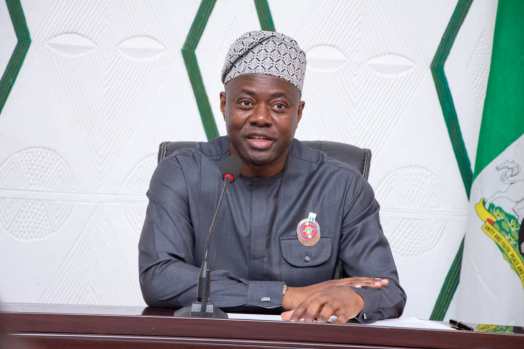 The Muslim Community Of Oyo State has commended Governor Seyi Makinde for the religious balancing of his newly reconstituted Cabinet.

“This is the ‘Omoluabi’ spirit,” the group says.

Read below the full statement from the group:

COMMENDATION
We had earlier complained to His Excellency, the Governor on:
(i) persecution and oppression of Muslims by the Christian Management at TESCOM and by some School Principals;
(ii) appointment of Judges ;
(iii) lopsidedness in the composition of the
Cabinet ; among other infractions perpetrated against Islam and Muslims.

We lodged all these complaints, through open letters to The Governor. We will not now merely write privately to applaud His Excellency for the good thing he has done. Hence, we express our commendation publicly through this Press Statement.

As we have said repeatedly, we are not clamouring that the Muslim Community should handpick Muslim members of your cabinet for you or impose anyone on you. Rather, all we urge is that, you should look for members of your Political Party who are Muslims, and their Islamic virtues would motivate them to call Your Excellency’s attention to any attempt by any over-zealous public official to breach equity.

We heartily commend Your Excellency. You have done well for beginning to hearken to our requests with this gesture of religious balancing of your cabinet.

OTHER INFRACTIONS
We would be most obliged, if the other festering issues are quickly addressed so that we can say it anywhere that we have a listening Governor who, in spite of being a Christian, is not Islamophobic.

Additionally, rumour mill has it that, pressure is being mounted to stampede Your Excellency to return schools to Missions and erstwhile private owners. Please do not toe this line. It is antithetical to religious peace and good governance. It is a move to take us back to the dark ages of total impunity against Islam. It will also further impoverish the down-trodden masses who will be forced to withdraw their children and wards from schools, when the missions and shylock school proprietors take over and start charging prohibitive fees. It will be hell on earth.

Rather than return schools, we urge that government should improve on infrastructure and quality of education in our schools.

CONCLUSION
In spite of the listed areas requiring redress, we should not forget that, the primary intent of this Press Statement is to COMMEND the Governor of Oyo State, His Excellency, Engr. Oluseyi Abiodun Makinde, FNSE, for ensuring religious balancing in the composition of his new cabinet.

May Almighty God continue to guide you aright in the governance of Oyo State and as you make efforts to address the other issues raised in this statement.

Once again, Your Excellency, we commend you on the Christian-Muslim balancing of your new cabinet.