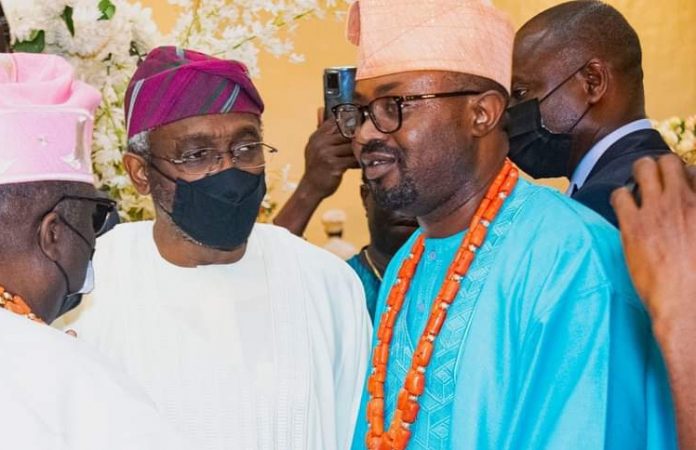 The speaker of the House of representatives, Rt. Hon. Femi Gbajabiamila, and the Minister for Niger Delta Affairs, Senator Godswill Akpabio were among dignitaries who stormed Owo local government area of Ondo state on Friday for the burial of Chief Benson Akinola Otegbeye JP, Olubunmi Tunji-Ojo’s Father-in-law.

Tunji-Ojo also known as BTO is the Chairman of the House of Representatives Committee on Niger Delta Development Commission (NDDC).

Also present at the burial were the deputy governor of Ondo State, Lucky Aiyedatiwa; wife of the Ondo state governor, Mrs Betty Anyanwu-Akeredolu; members of the house of representatives; members of the state house of assembly and commissioners among thousands of Political associates.

The late Otegbeye, whose daughter is married to the member representing Akoko North/East North West Federal Constituency, Olubunmi Tunji-Ojo was was buried amidst pomp and fanfare on Friday in Owo, his home town.

He was a Director of Civil Engineering, Ministry of Works and Transport in Ondo State.

He was a devoted Christian, an exemplary and revered Community leader, coronated the Asolo of Ehin Ogbe Owo and one of the King Makers and High Chief in Owo Kingdom. He was also rated in 2007 as one of the fifty (50) most outstanding Engineers in Nigeria by Nigerian Tribune.

Rep. Olubunmi Tunji-Ojo described the late Otegbeye as a loving and accommodating father, who could do anything to make others comfortable.

The Funeral programme, which held at the Cherubim and Seraphim Movement Church, Owo attracted dignitaries and political heavyweights within and outside the State.

Other dignitaries present at the reception which took place at the Mydas Hall, Owo, are the Chairman, Senate Committe on NDDC, Peter Nwaboshi and the Deputy chairman, House committee on national security and intelligence, Hon. Ade Adeogun.