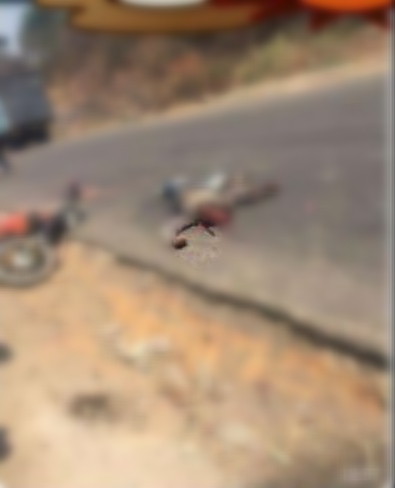 It is no longer news that the tragic accident that occurred at Akungba Akoko on Thursday at the deadly Okerigho hill claimed the live of a Bike rider also known as Okada rider.

A trailer had reportedly crushed the Bike rider who fell off from his bike while ascending the Okerigbo hill in the University town.

The drama that followed his tragic death occurred when the Men of the Federal Road Safety Corps (FRSC) from Ikare Akoko led by commander, Mr Oluropo Alabi made frantic efforts to carry the corpse to the mortuary.

This was vehemently restricted by the irate youths who even threatened to destroy their vehicle.

The irate youths and miscreants later set the trailer ablaze leading to tension and panic in the community.

The divisional police officer for Akungba Akoko Chief superintendent of police, Shakiru Ajibola confirmed the accident saying he led his men to the scene of the accident and was able to carry body of the Okada rider.

Meanwhile, a community leader from Akungba Akoko and a youth leader, Mr Adeboye Ado has renewed the calls to curtail incessant motor accidents at Okerigbo which has led to loss of lives and properties.