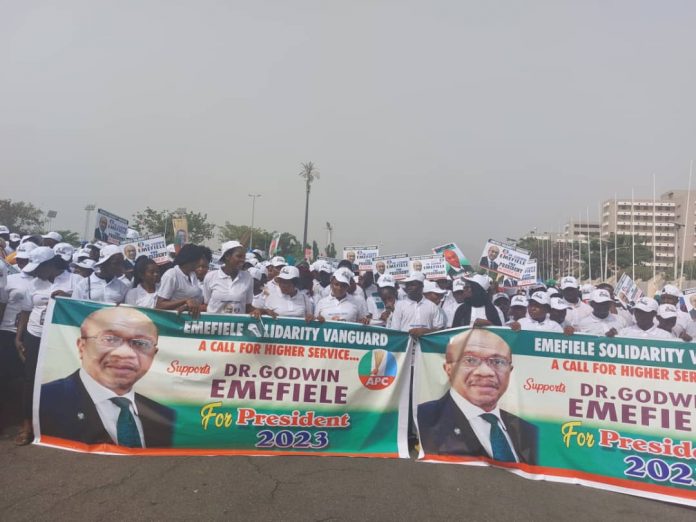 A pro-Emefiele’s presidency group on the aiges of Emefiele Solidarity Vanguard (ESV) has asked the leaders of All Progressives Congress (APC) at the ongoing national convention to allow Governor of the Central Bank (CBN) Dr. Godwin Emefiele to succeed President Muhammadu Buhari in 2023.

The group in their hundreds dressed in branded Emefile for President’s T-shirt, said that President Muhammadu Buhari has been able to achieve so much because of the fiscal policy of the Central Bank of Nigeria and its implementation by Emefiele-led CBN.

Addressing newsmen during the rally to seek more support for the CBN governor, coodinator of the group Pariot Daniel Enyi, said his group was at the national convention to “celebrate the anchor borrower’s scheme of the federal government which has led to the agricultural revolution, the monetary policy that has stablise the economy, the Forex Policy, the transformation of the automobile industry, the ease of doing business, social investment program and many more. The federal government is lifting Nigeria out of poverty.

“Today, we say thank you to the Governor of the Central Bank Nigeria, Dr. Godwin Emefiele for his steadfastness and patriotism in discharging his duty as the head of our apex Bank.

“As the tenure of President Muhammadu Buhari is coming to an end, the Nation needs a very strong will, and ideologically transformed personality with justifiable evidence of patriotic services like Dr. Godwin Emefiele as the next President of Nigeria.

“We are very happy that this party has maintained the economy of Nigeria as the best and strongest economy in Africa.”

While asking APC leaders to support the group for the actualisation of Emefele’s presidency, Enyi said: “We have identified Dr. Godwin Emefiele based on his sense of patriotism and commitment to duty, his genuineness in rendering service to the Nation as President Buhari’s possible successor. This is a project that all well meaning Nigerians should be involved. We should look for our best brains and encourage them to take position of higher responsibilities, Emefiele is being offered such by Nigerians.

“We call on the political class, the business class and the academians to prevail on Dr. Godwin Emefiele to take the mantle of leadership from our able leader, President Muhammadu Buhari as he hands over power in 2023.”

Some members of the ruling All Progressives Congress (APC) from Ekiti state on the platform of Ekiti Mandate Group have staged protest at the ongoing national convention of the party’s, rejecting the primary election that produced Biodun Oyebanji as party’s governorship candidate.

Oyebamiji, who is said to be anointed candidate of governor Kayode Fayemi emerged governorship candidate after other aspirants boycotted the primary election.

Staging a protest at the Eagle Square venue of the APC national convention, the Ekiti protesters in their hundreds were seen with placards bearing various inscriptions, calling on the party to recognise Eng. Kayode Ojo as the preferred choice to fly the party’s governorship ticket.

Some of the inscriptions include; “Return our stolen mandate” “Kayode Ojo is our choice”, “Governor Fayemi is killing APC in Ekiti state,” “we reject imposition” among others.

Speaking on behalf of the protesters, the convener of the Ekiti Mandate Group Abiola Oludele Timilehin, threatened that if justice is not done his group will end the reign of APC in Ekiti state.

Timilehin said: “We decided to create scene here at the national convention of our party so as to call the attention of our leaders to the calamity that’s about to befall our party in Ekiti if that kangaroo called primary election is not reversed.

“Recalled that the state’s governorship primary that was conducted on the 27th of February was reportedly marred by irregularities, which led most of the aspirants, including Engr. Kayode Ojo to call for its cancellation.

“The aspirants had accused Governor Fayemi of manipulating the process in favour of his own anointed candidate, who was declared winner that kangaroo arrangement called primary election.

“Our party leaders and the incoming National Working Committee (NWC) members must note it that Ekiti real members are aggrieved and nothing will perscify them unless our preferred candidate in person of Kayode Ojo is seen on the ballot.

“We, therefore, appeal to our leaders and the incoming NWC members to prioritise the need to urgently correct the injustice perpetrated by Governor Fayemi and his cohorts in Ekiti state before the governorship election to avoid the what happened to APC in Zamfara state, Rivers state and Oyo state,” Timilehin warned.