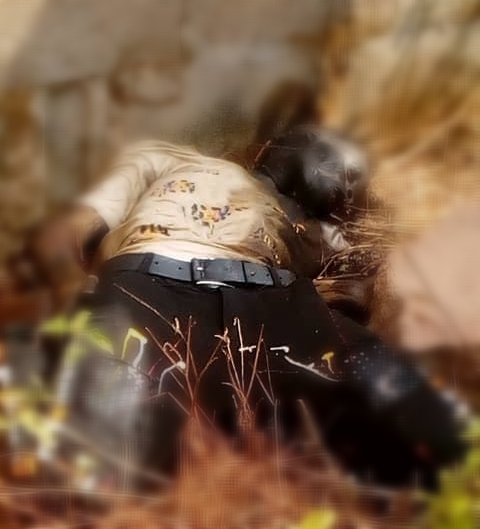 Mr Olalekan Ibironke, a 25-year-old man was on Monday, March 7, found dead at an uncompleted building behind his residential house, lying on the ground with the rope hung inside the building.

The father of two, was said to have been missing for eight days prior to him being confirmed dead. He was last seen at a church service a week before he was found dead.

Our correspondent gathered that the late Olalekan, after receiving phone calls in the church on that fateful Sunday, dropped a voice note for his wife, saying she should take care of his two kids and marry another man.

It was also gathered that Olalekan, until his demise, was a phone repairer who managed and provided for his immediate family through the work.

Residents of the community said they have been perceiving a strong odour within the area, thinking it was a dead animal until the owner of the uncompleted building came around to cut the grass and found his body.

Residents who spoke at the scene of the incident, admitted that the deceased lived peacefully in the community and he was jovial with everyone.

While reacting to this sudden and disheartening occurrence, a resident who preferred anonymity, said “he was an easy going guy, and he didn’t share any depressing story with anyone, no one knows what he was going through.”

His father, Mr. Moses Ibironke, narrated that, he was called upon by his son’s wife, that he couldn’t see him.

“When I heard about the sudden and unexpected disappearance of my son, I was sad and reported at the police station and notified other security operatives. I was told to bring his pictures, that after 15 days, if he is still missing they would find something to do,” he explained.

He said their thought was that he fled to somewhere until they found his corpse in the uncompleted building.

While reacting to his death, Olayinka, son of the late Lekan’s landlord, said, “the only thing I can say about the guy, is that he was chubby before, but all of a sudden he started loosing weight. The cause of this was uncertain but we later noticed he started taking marijuana and other hard drugs”.

Olayinka added that, he seldom talk to him but when he heard that he was missing, he asked his wife if he explained anything to him, but the wife responded “NO.”

He added that he was an easy going person but what led to him committing suicide is what they don’t know.

His corpse was taken away in a casket made immediately for interment.