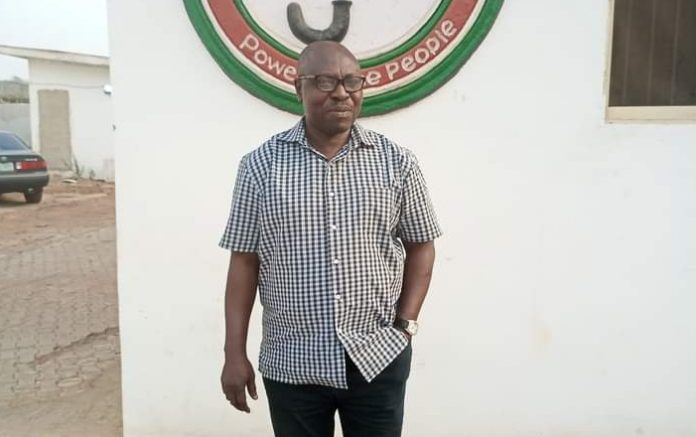 Kennedy Ikantu Peretei, the publicity secretary of the PDP in Ondo State says no fewer than 100 businesses are at risk of closure, following the commencement of demolition of the trade fair complex in Akure, the Ondo State capital.

Peretei, who accused the Governor of Ondo State, Oluwarotimi Akeredolu of insensitivity towards the plight of the businessmen at the complex, said the notice of demolition came 14 days to the exercise.

The PDP Chieftain in his latest series tagged “Akeredolu’s misrule in Ondo State”, said the action of Mr Akeredolu, has brought wailing and tears to the entrepreneurs who are tenants of the State government, at the popular Trade Fair Complex, located at Igbatoro road, Akure.

Peretei wrote: “It all started like a joke, when on 24th March, 2022, occupants of business premises in the Trade Fair Complex received a Notice to Quit the complex within 14 days. Efforts to seek audience with the Honourable Commissioner for Commerce, Industry and Cooperative Services, Mrs Lola Fagbemi yielded no results. The businessmen also approached a lawyer to write to the Attorney General and Commissioner for Justice, explaining the illegality of the actions of the state government, all to no avail.

“Even in the most lawless of societies, such level of lawlessness is unthinkable. In a civil servant state where the workers are yet to receive November, 2021 salary, the few who provide employment and helping to energise the economy are being traumatised for no just cause.

“The bulldozer that was initially assigned to pull down the structures was unable to deliver on the assignment, hence, an excavator had to be deployed to reduce to rubbles businesses that are struggling to survive in a very inclement economy.

“From the accounts of some entrepreneurs who watched helplessly as their means of livelihood got crushed by the roaring equipment, they invested more than 70 million naira to upgrade the entire premises to what it is now. The funds so invested were converted to rents for them, with some having more than three years unexpired rents. More than 100 businesses risk being extinguished if Akeredolu succeeds to pull through with this anti-people exercise.

“While the official explanation for the demolition is the plan of government to convert the entire place to a “Business District”, there are reports that Akeredolu’s Heir Apparent, Babajide, had bought up the place for some of his phony projects.

“For a lawyer of Mr. Governor’s standing, does he require a lawyer to explain to him that, annual tenants can not be ejected with a 14-day notice? Did he give any consideration to the families of those who own businesses in the place? Are the people behind this illegality aware of the economic implications of their actions to the state? If indeed, the government is desirous of establishing a Business District, is the Trade Fair the most suitable place in Akure? Why does Governor Akeredolu always take joy in making people cry? What is really urgent about establishing a Business District that, your tenants of over fifteen years have to quit within 14 days?”

“I also have it on good authority that, a similar notice was given to Shoprite, which is also in the same vicinity of the Trade Fair. Will Akeredolu pull down Shoprite as well in pursuit of the new Business District? Does Akeredolu and his cohort know how many families have their daily survival tied to the existence of Shoprite? In five years of the All Progressives Congress (APC) led government of Akeredolu, there has been nothing to jubilate about in the State. There are frightening statistics of deaths occasioned by inability of ordinary people to buy drugs or pay hospital bills. Most homes are on edge, as parents are unable to provide basic needs for their families. The few that are struggling to remain afloat are the ones being chased around with bulldozers.

“Amongst the businesses being threatened, there is a Training Institute valued at about 100 million naira, fitted with modern equipment, laptops, furniture and personnel drawn from across Nigeria. Ondo State should not be in the news for the wrong reasons. Akeredolu should look elsewhere to establish his business district,” he said.