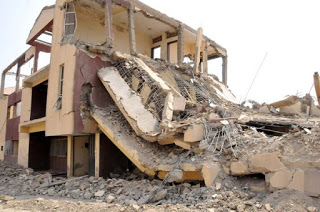 Another three-storey building has collapsed on Ibadan Street, in the Ebute Meta area of Lagos State.

She noted that some people, who resided in the building that collapsed, had been trapped, adding that a search and rescue operation was ongoing to rescue the trapped victims.

As of the time this report was filed, our correspondent could not confirm if any death had been recorded as a result of the incident.

Adeseye said, “An alert of a collapsed three-storey building on 32 Ibadan Street, Ebute Meta, was received around 9.48pm on Sunday, with the Lagos State Fire and Rescue Service already at the scene.

“A search and rescue operation is ongoing to rescue some of the trapped victims. It is a residential building that collapsed. More updates will be communicated.”

Editor’s note: picture has only been used as illustration.