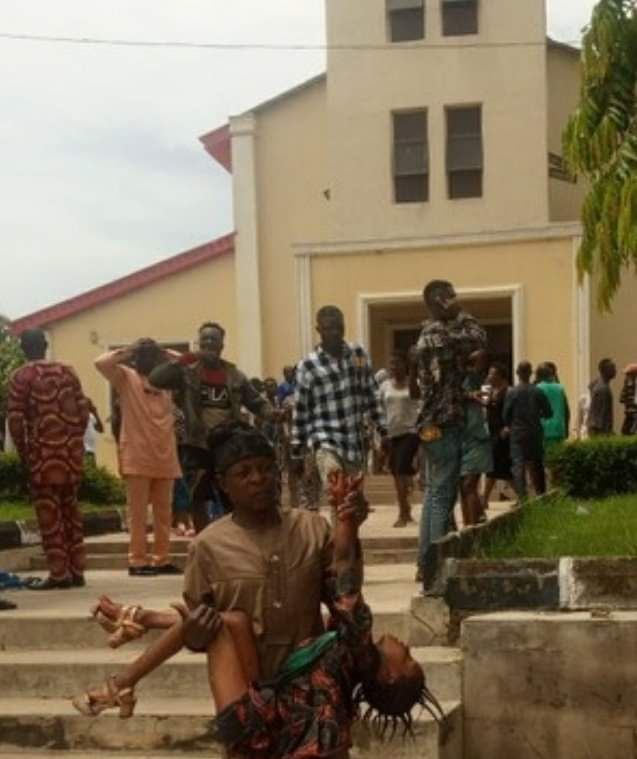 The former Deputy Governor of Ondo State and PDP Candidate for Ondo South Senatorial District, Chief Alfred Agboola Ajayi has commiserated with the family members of the victims of the killings in Owo, the Olowo of Owo, Oba Ajibade Ogunoye, the government and people of Ondo State.

Ajayi added that he was shocked, sad and devastated by the news of the killings at the St Francis Church, Owo, on Sunday, June 5, 2022.

“This horrendous murder of innocent people in the Church of God is a crime against humanity. Those who carried out this heartless attack on defenceless people- men, women and children in their numbers deserve no place in any decent human society.

“Government at all levels must do everything possible to apprehend the perpetrators of this dastardly act and most importantly prevent reoccurrence of this senseless attack.”

Owo Attack: Perpetrators of this heinous crime must not go unpunished

The Chairman of the Ondo State Council of Obas and the Deji of Akure Kingdom, Oba (Dr.) Aladetoyinbo Ogunlade Aladelusi, Odundun II has condemned the attack on the worshippers of St. Francis Catholic Church in Owo.

He described the unprovocative attack as barbaric and highly traumatizing which had left the ancient city of Owo in unquantifiable pains and agony.

In a statement signed by his Chief Press Secretary, Mr. Adeyeye Michael, Oba Aladetoyinbo said that the massacre of innocent and law abiding worshippers including women and children was the height of crime against God and humanity.

It is so sad that there is no sanctity and respect for human lives by these assailants who killed innocent souls who have gathered to worship God and also pray for our dear nation.

This is a sad for us in Ondo State and the hearts of all the traditional Rulers and good people of the sunshine state is heavy over this ugly incident and our heartfelt condolence and prayers is with the family of those who lost their loved ones in this barbaric attack.

Oba Aladetoyinbo wishes to commiserate with the Governor of Ondo State, Arakunrin Oluwarotimi Akeredolu, SAN and the Olowo of Owo, Oba (Dr.) Ajibade Ogunoye over this incident.

The Deji urges the security agencies to go after theses attackers and bring them to justice for sins against humanity.

The Traditional Rulers in Ondo State will continue to support the Government in ensuring that the state is rid of all criminal elements.

Oba Aladetoyinbo prayed God to grant the departed soul eternal rest and console those who have lost their loved ones and grant them the fortitude to bear this irreparable loss.

The Chief of Staff to the governor of Ondo State, Chief Olugbenga Ale, has condemned the attack on Catholic worshipers by some yet to be identified gun men at Owo town this morning.

In a Press Statement undertaken through NewsRader, Chief Ale decried the act as an attempt by certain unidentified persons to, deliberately, truncate the peaceful environment of the State for reasons known to them only.

“What happened was a great loss to the family of the affected ones. It was a great loss to Owo community, Ondo State and Nigeria in general, coming at a time when all stakeholders in public and private sectors are striving to establish and maintain peace in our communities. Nobody can say this type of attack can ever happen in our community,” he said.

The CoS to governor Oluwarotimi Akeredolu, SAN, posited that the profound efforts by the governor through the institution of the Amotekun Corps in Ondo State has brought relative peace to the communities as cases of robbery, kidnapping and other dastardly acts which were rampant in other areas of the country have been, drastically, minimized in Ondo State.

He expressed confidence in the governent and the person of governor Oluwarotimi Akeredolu, SAN, to bring the perpetrators to book, as well, recharge the tone of the great level of peace which has existed in the State before and now.

“I commiserate with my governor, as well. All of us in the State are his children. This loss, today, is a great one to him”.

Chief Olugbenga Ale calls on the youth, community leaders and all the indigenes of Ondo State to be proactive in matters that bother on security. “We must be fast at notifying the security agents of any one or anything that appears strange or suspicious around us”, he said.

He calls on religious leaders in the State and in the country, generally, to preach peace more than anything else in their churches and mosques.

The APC Chieftain who said the Sunday terror attack at St Francis Catholic Church, Owaluwa Street, Owo was a crime against humanity charged all security agencies to leave no stone unturned in bringing the perpetrators of the dastardly act to book.

In a statement made available to newsmen, Adelami, who is the Amuwagboye of Owo kingdom, commiserated with the Bishop of the Catholic Diocese of Ondo, Jude Bishop Arogundade, the Olowo of Owo, His Imperial Majesty, Oba (Dr) Ajibade Gbadegesi Ogunoye III, Governor Oluwarotimi Akeredolu, SAN and the entire people of Owo, saying the long standing believe and tradition of “no war conquers Owo” will lead to the arrest of the attackers.

“This ugly attack without any provocation is least expected because Owo has been a very peaceful community before the terrorists disrupted the peace of the community. Concerned authorities must review and beef up the security architecture of Owo and the entire state, with emphasis on intelligence gathering to prevent any reoccurrence.”

Adelami thanked prominent Nigerians, traditional, religious, and political leaders who came have empathised or visited Owo to commiserate with the families of those who have lost their loved ones, admonishing people of faith to “remember the affected families in their payers for strength to bear the irreparable loss at this trying period”.