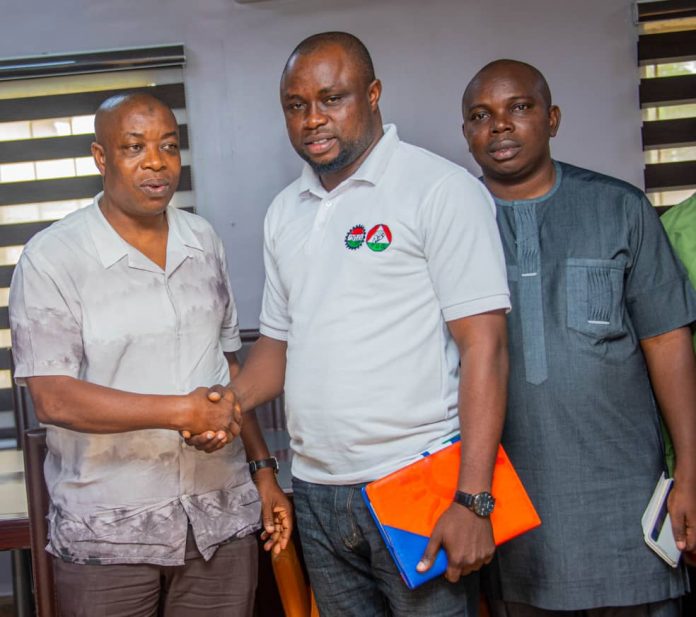 The Ondo State Commissioner for Infrastructure, Land and Housing, Engr. Raimi Aminu has commended the high level of professionalism so far exhibited by journalists in the state, assuring residents of Akure that potholes on major roads are being tackled.

Aminu who gave the commendation while receiving Executives of the Nigeria Union of Journalists, NUJ, Ondo State Council led by Comrade Leke Adegbite, in his office in Akure, said Governor Oluwarotimi Akeredolu had ordered the ministry to device means of fixing the potholes immediately.

The NUJ boss had earlier expressed concern over the increasing potholes particularly along major roads in Akure, the state capital.

While commending the watch dog role of the journalists in the development of any society, the Commissioner said the Akeredolu-led government in the state had always seen constructive criticism as a catalyst for development, saying it would spur government to do more for the people.

Aminu, who blame the recent up surge in potholes in some major streets in Akure on recent increase in cost of bitumen and the current increased down pour, said government was doing everything possible to fix them, targeting the appropriate weather such that resources would not be wasted as the asphalt is not friendly with too much water.

“The pot holes issue is a thing of concern to us. We have the estimate, we have the bills here but there is no money. And we even want to start on credit these days, the rain is disturbing again.

“The ones we did recently, we will have to repeat because of the rain. Look at that Fiwasaye Roundabout, somewhere in Ijapo even the road to the governor’s office. Everytime we patched and patched. It is because of the weather,” the Commissioner lamented.

“So we need some dry weather because if asphalt moisture content is too much, it will spoil again. So we should plan such that immediately we are approaching dry season, we swing into action,” Aminu assured.

The Commissioner promised to fashion out with NUJ, how to actualise request of the union for land that could be used for Second phase of PEN ESTATE in the State.

Also speaking the ministry’s Permanent Secretary, Engr. Owolabi Allen, commended regular support of the media to the state government’s activities, promising that the ministry would continue to reciprocate the gesture.

Earlier in his remarks, the State Chairman, Comrade Leke Adegbite had commended the harmonious relationship between the government and the media in the state.

Adegbite lauded what he described as infrastructure revolution of the Akeredolu’s government all over the state citing the first ever fly over in Ore, the dualization of Oke Alabojuto in Ikare Akoko and Akure township roads among others.

He called for more collaboration from the government to enhance more development.

The NUJ boss however expressed concern on the increasing pot holes particularly along major roads in Akure, the state capital, saying it may erode the good jobs government was doing on infrastructural development of the state.