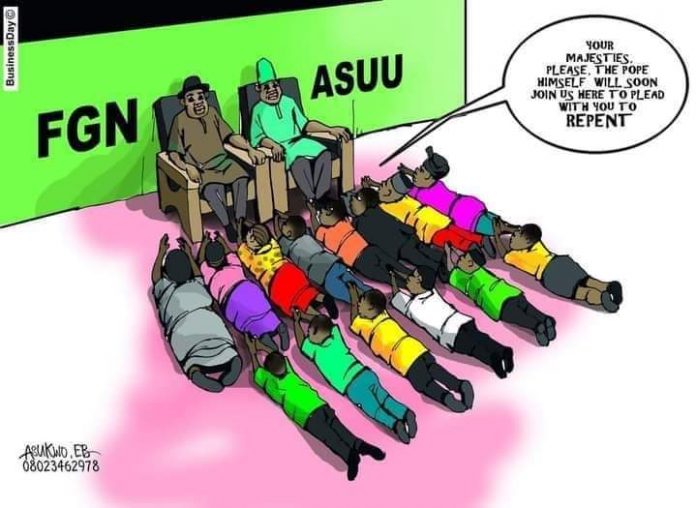 The state of the educational system in Nigeria is what has raised concern among students, parents, and the masses in general.

For an unsolicited opinion, students are more affected by the strike than anybody else.

Everyone is not surprised by the act of the Federal government and the Academic Staff Union of University (ASUU) strike because it has been like the normal routine in Nigeria’s public universities.

The action continues to elongate the academic calendar of public universities and by extension, the duration of students’ courses and thus leads to an enormous setback in the educational system.

Students from public universities affected by the ongoing strike react and here is what they have to say:

There’s another side to every coin hence, the positive and the negative impact of the industrial action embarked on by the Academic Staff Union of Universities. On 1st February 2022, the association embarked on a month’s warning strike to express her disappointment in the FG for not honoring the 2020 agreement between the two parties and other issues.

Students never envisioned that the industrial action would linger to this length and were therefore surprised to see that the FG has not been able to reach a concrete agreement with the association, hence, the reason the strike still lingers.

As an undergraduate in my finals, I have been affected a lot as the majority of my plans have been made void. Initially, I am supposed to have written my final exam as an undergraduate and be preparing for the course ahead. I had thought I would not have any reason to renew my rent in School but unfortunately, the strike has entered almost its sixth month and still counting, making every concerned finalist and me “hanging finalists.”

During this period, I have been opportuned to visit various States in the Southwestern part of Nigeria, learning different things from different States, especially in terms of Socio-culture.

I have taken an online course that availed me the privilege to secure a certificate on “Life and Business Skills”, I have Improved my political participation and interest in national matters, participated in Christian apologetics summits, and engaged in reading various articles (local and foreign) and also gathering facts and data for my long essay (project).

Age-wise, the lingering strike has caused a major setback as it has deterred me from achieving what I intend to achieve at a particular age.

It’s quite unfortunate that to look for a job in a place where qualifications such as NCE, OND, HND, B.SC, et al – are required, the highest qualification I’m having at present is O’level result while B. A. is still in view and this is a major deterrent as it concerns job security.

In the midst of it all, there are fellow students who I know who have utilized the opportunity to acquire skills but the fact remains that the Government has failed us by not according to a place of priority to Education.

My sincere desire is that the FG reach a concrete agreement with ASUU, thus ensuring the lingering strike is brought to a halt so that we students can go back to our various classes.

The news headlines and updates about this ongoing strike are frustrating. I listened to the extent that I got bored by the outcome of the fruitless meetings concerning the persistent strike.

There is barely a semester without a strike, then, how do you expect the educational system to be effective when our graduates are half-baked?

I should have graduated about a year ago but the educational system of Nigeria happens to me.

Most students that are now used to the ASUU strike have moved on by doing one thing or the other but what about those students sitting beside their Radio/TV sets waiting for a positive reply?

Do you know what it is to strike for two years in between a four year course?

An adage says, “wherever two elephants are battling, the grasses will suffer,” the students are the ones suffering most in this situation.

Most of these politicians and even some university lecturers have their kids studying outside the country because they know the mess they caused the educational system.

The federal government and the Academic Staff Union of the University are requested to find a lasting solution to the strike because those of us have no escape route because of funds.

ASUU’s strike is of no doubt a great setback to the student as a whole. The strike leads to a lack of interest in education, and depression and it is indeed a great setback in the academic curriculum.

I have been greatly affected by the strike despite being in my finals, although I have been able to maximize the opportunity of the strike by setting up and rebranding my makeup business, creating my podcast, and taking a series of online self-development courses.

I still need to earn this certificate, it is only in Nigeria you register for a four years course and end up spending an additional year without having an extra year.

Open our schools! We need to go back to our classes!

What’s the faith of a country that has refused to invest in education?