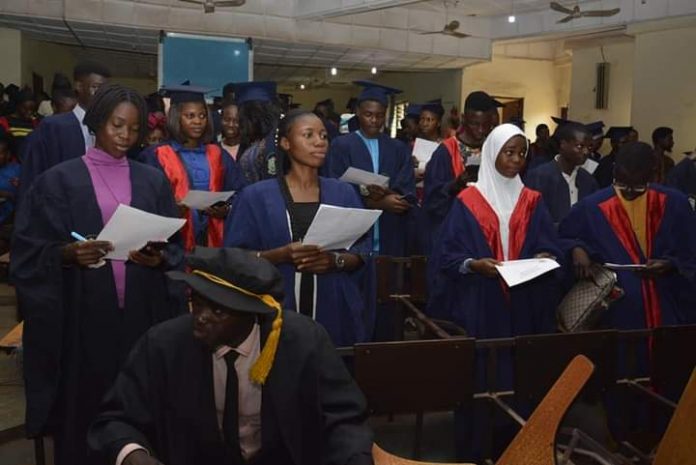 Two thousand and eighty one students admitted for Degree and Nigeria Certificate in Education (NCE) programmes, in the 2021/2022 academic session were on Thursday 8 September 2022 administered with matriculation oath by the authorities of Adeyemi College of Education Ondo.

In his remarks on the occasion, the Vice- Chancellor, Obafemi Awolowo University (OAU) Ile-Ife, Prof. Adebayo Simeon Bamire, represented by the Dean, Faculty of Education from the University, Prof. B. A. Omoteso, congratulated the matriculants, and their parents, stating that the decision by the students to choose the Institution, was not a mistake as “the College is the best College of Education in the whole Nigeria”.

Harping on the need for the new Students to make effective use of the admission opportunity given to them, the University Administrator, said “your primary aim of being here is to study, and at the end, to bag your degree, all other things are secondary, so make sure you face your studies squarely”, he remarked.

The OAU Vice Chancellor also stressed the need for the matriculating students to always obey all rules and regulations in the institution, choose their friends prayerfully and carefully, dress properly and make effective use of their time.

Also speaking on what he listed as four P’s that could help the students to succeed, Prof. Adebayo Bamire mentioned them to include purpose, perspective, productivity and persistence, stating that when applied, would guide them approximately, and enhance their success in the course of their educational pursuit.

In his remarks, the Provost of the College, Dr. Samuel Akintunde, advised the matriculating students to be good ambassador of the Institution.

He stressed the need for them to abide with the matriculation oath saying any breach of its content would bring repercussion.

The Provost further admonished the students to register for their courses on time and refrain from engaging in social vices such as rape, indecent dressing, examination malpractice, or indulge in anything that could terminate their studentship and lead to their expulsion from the College.

Dr. Akintunde urged the matriculants to make effective use of line of authority, when they require help by meeting the Dean Student Affairs, visit office of Counseling and Human Development Centre, Deans and Directors and Student Union.

He prayed that God would grant them success in their educational career.

Also present were the representative of the Ondo State Coordinator of Joint Admission and Matriculation Board (JAMB) Mr. Johnson Ayoade, Deans and Directors, Heads of Departments and Unit, Staff and Students to mention but a few.