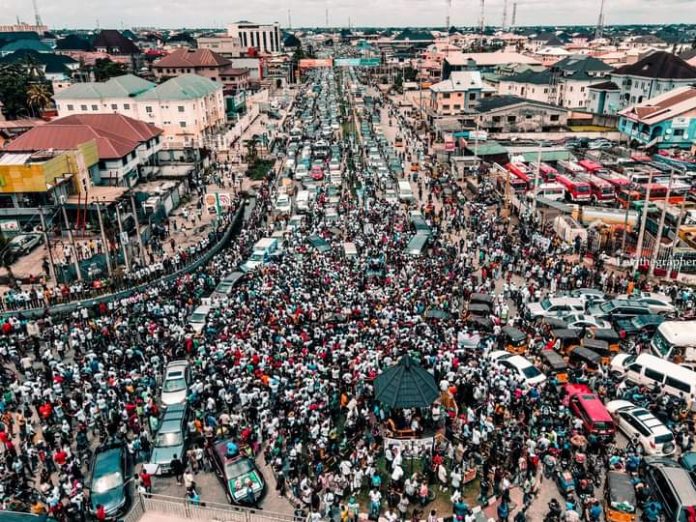 The ObiDatti movement on Saturday held its mega rallies in Lagos.

The supporters who took to the social media to showcase pictures of the rallies also took a swipe at the ex National Chairman of APC, Adams Oshiomhole.

Oshiomhole had in a recent interview dismissed the movement as inconsequential.

“This Obi-dients of disobidience time will tell. We now live in a world where we can have ten young men and women in one room, whether motivated or not motivated and they can churn out 1 million stories using different names. You need to find out that this whole thing is being done in one room. Time will tell,” Oshiomhole said.

But majority of the supporters mocked Oshiomhole’s opinion, posting pictures from the rallies to tell the ex Edo Governor that his assertions were wrong.

Some of the pictures from the event:

The vehicular traffic in several parts of Lagos metropolis was grounded from Saturday morning till early afternoon after thousands of youths marched along major roads in support of Peter Obi.

The Labour Party presidential candidate’s supporters defied the morning downpour to participate in the #4MillionManMarch4PeterObi held at Lekki, Surulere, Ikeja, and Festac Town – the organisers planned to assemble one million people at each of the venues.

At Ikeja, the supporters assembled at the Archbishop Vining Church from 7 a.m. amidst a contingent of armed police officers. At the same time, a similar crowd had gathered at the FHA ground in Festac Town, and at the National Stadium in Surulere.

At Lekki, the supporters marched along the Lekki-Epe expressway, avoiding the tollgate where over a dozen police patrol vans and armed officers laid siege.

Ten persons had attempted to stop the rally through a court order, filing a suit before the Federal High Court in Lagos stating that the event could precipitate a repeat of the 20th October 2020, #EndSARS violence. They urged the court to stop the rally at the tollgate or any other part of Lagos.

The judge dismissed the suit, saying the people have the right to assemble anywhere in the state. He, however, ordered the supporters to pass through the Lekki tollgate to their destination and not stop at the plaza.

As the rally got underway Saturday morning, armed police officers watched closely, but the participants were undeterred. They marched through the major roads chanting ‘Obi’ and dancing to some popular Afrobeat songs.

“You are one of us, I know you have a son like me,” a participant fired at a police officer who sat in a patrol van along the Lekki-Epe expressway, filming the procession on his mobile phone.