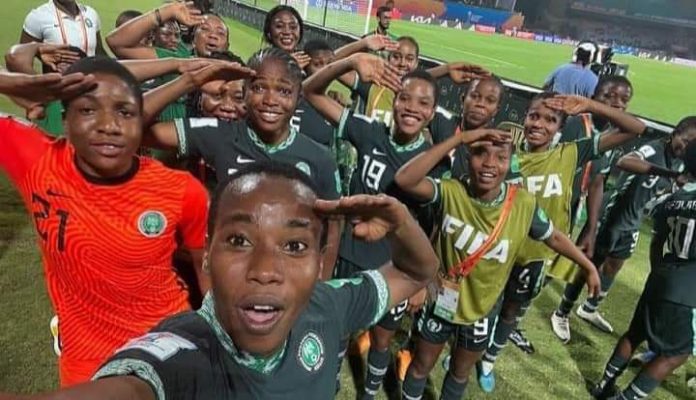 The Flamingoes of Nigeria have won bronze medal at the 2022 World Cup Under-17 in India after beating Germany.

The German side produced one of the best comeback in football history before they eventually lost on penalties.

The Germans came back from 3-0 down to draw 3-3 against the Flamingos before they lost 3-2 during the shootouts.

The Flamingos started the encounter on an impressive note, but they had to wait until the 20th minute before netting their first goal through Opeyemi Ajakaye.

Aminat Bello scored the second goal for the Flamingoes in the 48th minute before Etim got the third goal in the 63rd minute.

However, Germany pulled one back in the 73rd minute through Jella Veit with Paulina adding the second before Loreen Bender restored parity at the death to take the game into penalties.

Coach Olowookere and his team went into this match against Germany as wounded lions having lost their semifinal game against Colombia in a painful situation. (text from Positive FM)