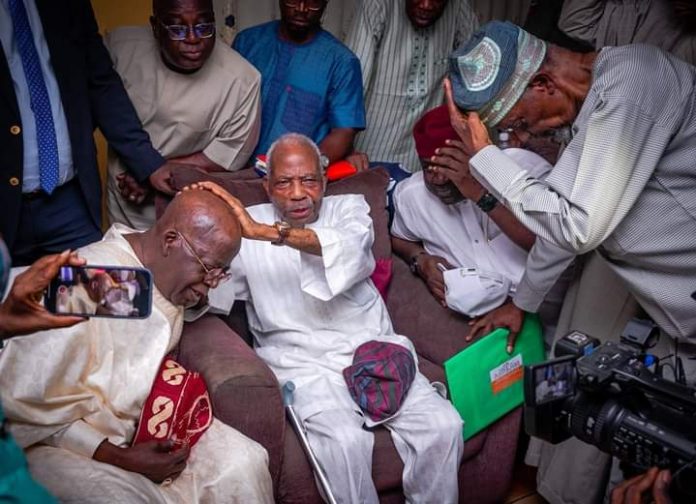 The Presidential Candidate of the All Progressives Congress (APC), Asiwaju Bola Ahmed Tinubu on Sunday received the support of pan Yoruba Socio-political group, Afenifere in Akure, the Ondo State Capital.

The group noted that Tinubu will be a pan-Nigerian President if given the chance to lead the country.

The group’s National Leader, Pa Reuben Fasoranti who received Tinubu in his living room prayed for the APC Candidate, placing his hands on his head.

Pa Fasoranti expressed the belief that with his great performance when he was Lagos Governor, the APC Presidential Candidate would do well as the nation’s President.

While speaking, Tinubu said he received massive support from the North, hence, his government will be fair to all regions, when elected as the president in 2023 elections.

Tinubu who also received the endorsement of other Afenifere leaders, said his ambition was to turn things around for better in the country.

According to the APC Presidential Candidate, the action plan tagged “Renewed Hope” is progressing as many governors and leaders in the north are giving his ambition massive support.

Two of the Afenifere leaders, Chief Seinde Arogbofa urged Tinubu to address issue of insecurity and restructuring with all seriousness, while Chief Olu Falae charged Tinubu to look into the falling value of naira and economic hardship when he emerged the President.

Also speaking, the Oyo state governor, Mr Seyi Makinde represented by his deputy, Adebayo Lawal promised to follow the path of Yoruba leaders to ensure the emergence of Tinubu as President.

Others who were at the event included the deputy Governor of Ondo State, Lucky Aiyedatiwa; new Ekiti state governor, Mr Abiodun Oyebanji, drummed support for the aspiration of Tinubu.