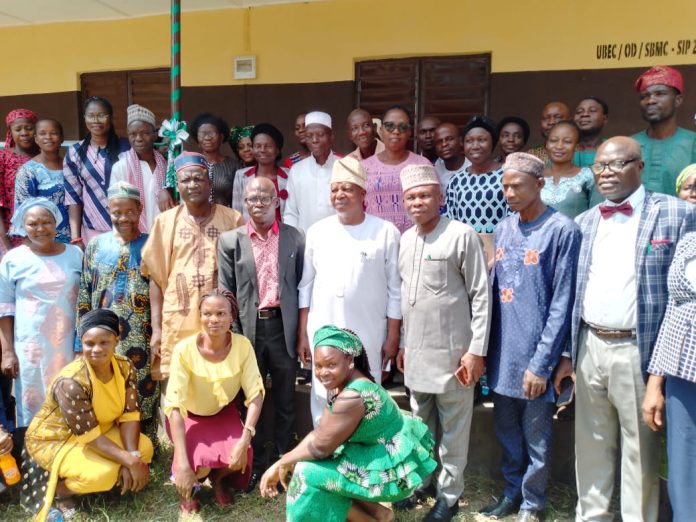 Olabimtan who charged the teachers to be good ambassadors of the teaching profession because it is a noble one enjoined them to be industrious by adding another stream of income in order to live a good life especially after leaving the public service.

Ondo SUBEB boss who used himself as a vivid example averred that while teaching in a secondary school in one of the towns in now Ekiti State took a loan from a thrift society to finance Taxi Cab business which he used daily to convey farm produces to town before and after school’s hours adding that this didn’t affect his primary duty as a teacher because he planned his time.

Speaking on the essence of the The School Based Management Project , Ondo SUBEB boss said it is a special intervention fund from UBEC directly to some selected schools to ensure the school and Community ownership of the projects. Adding that this will ensure the sustainability of the project since the immediate stakeholders were involved in the construction.

While commending the SMBC of AUD Grammar School Akungba for a job well done Olabimtan promised that SUBEB has concluded plans to award a contract of an additional block of three classrooms for the school. He said since the community, the teachers and the students know that this is there school because they participated actively in its construction they will not allowed it to deteriorate.

He added the SBMC of this school has done a good job. For the avoidance of doubt, only 5 Million Naira was provided for the job by UBEC but the SBMC delivered a project of 10 Million Naira no wonder they came first in the assessment out of the 31 projects undertaken by SMBC in the State in the year under review”

Earlier, the School Principal Mr Azeez thanked the UBEC and SUBEB management for making the school one of the beneficiaries of the SBMC Project in the State. He specially thanked SUBEB boss for his immense contribution to the development of the education sector in the state.

Considering the performance of the AUD Grammar School SMBC in the scheme of things especially in the area of prudent management of fund allocated and delivery of quality job the Principal like oliver twist appealed for more projects from UBEC and SUBEB in their next consideration.