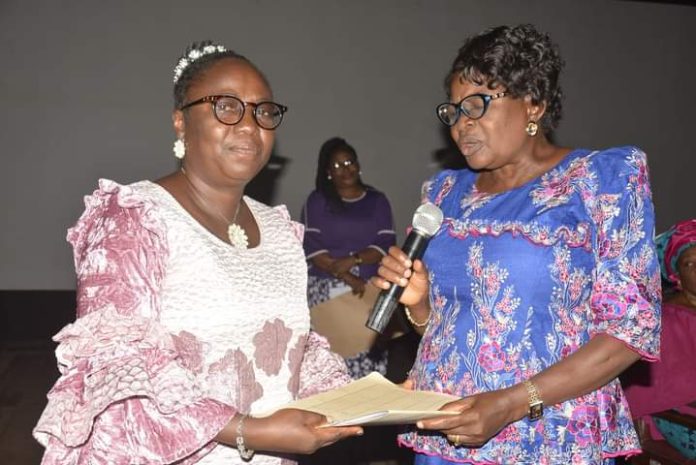 Adeyemi College of Education Female Staff Association (ACESFA), has inaugurated new executive officers that would pilot its affairs for the next four years.

Speaking while inaugurating the 13-member executives, at a brief ceremony held in the College on Wednesday 30 November 2022, the College Acting Provost, Dr. Gbade Ikuejube, represented by Registrar of the institution, Mrs. Olufisayo Fakorede, lauded members of ACEFSA for organizing the event, which he described as the beginning of a new era.

The Acting Provost also congratulated members of the outgoing executives under the leadership of Mrs. O.J. Adebayo, for piloting the affairs of the association since its establishment.

Underscoring the important role which women play in society as mothers and moulders of lives of children, Dr. Ikuejube said it is important that matters relating to them should be given adequate consideration.

The Acting Provost gave credit to Dr. (Mrs.) M.C. Onuegbu for conceiving the idea of establishing the association and the former Provost of the College, Prof.Olukoya Ogen for given approval to the vision adding that the development has gone a long way in promoting the interest of women and given them sense of belonging in the institution.

While stressing the need for all female staff of the College both teaching and non-teaching to identify with the association by registering as members, the College Chief Executive said the move would increase their numbers, strengthened unity and cooperation.

Adebayo listed some achievements recorded during her tenure to include the celebration of two international women’s day, love feast and a prayer rally. In addition, she equally stated that the association also did empowerment programme where less priviledged individuals including widows were presented with cash “to enhance their trades”.

Also in her address, the incoming President of the association, Mrs. Olusola Eniola Olagundoye, expressed gratitude to God and Management of the College for providing enabling environment for the association to thrive since its establishment in 2018.

While reiterating her commitment to the vision of the association, the new ACEFSA President drop hints of plan to reposition the group for better performance through the constitution of Board of Trustees stating that the move was aimed at tapping from the wealth of experience of members of the association who are elders and whose counsel would be needed to move the association to higher ground.

Regarding their inauguration as call to service, Olagundoye, therefore, appealed to other members of the new executive to put in their best in order to justify the purpose for which they were elected.

Similarly, the ACESFA President also appealed to female members who are yet to collect membership form to do so and fulfil their obligation in the payment of prescribed annual dues.

The event which held at the Olusegun Obasanjo Auditorium and witnessed by eminent personalities from within and outside the college, climaxed with the admission of oath of allegiance of the association to the new executive by the College Registrar, Mrs. Olufisayo Fakorede.

More photos from the event.