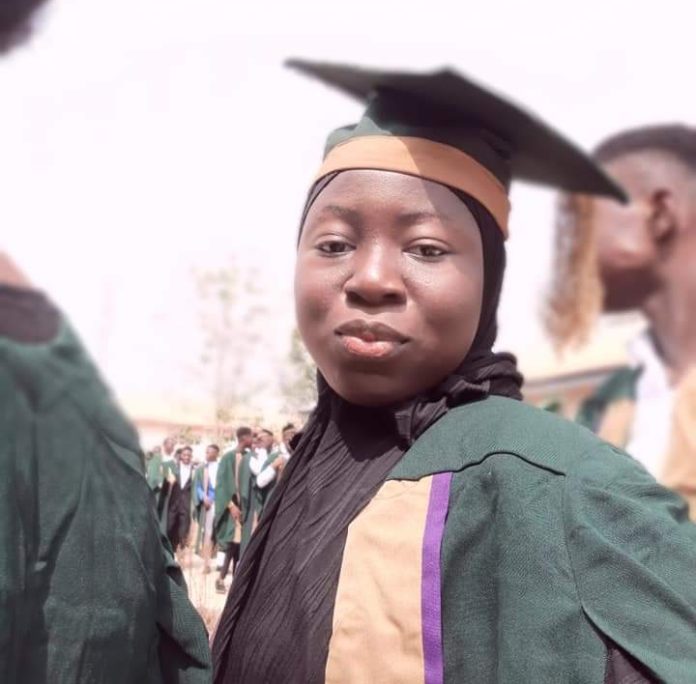 Mrs Oluwabi, who graduated with a CGPA of 4.68 was unveiled on Thursday at the ceremony held at the new auditorium of the University.

The Ogun-born scholar in her remarks, during the climax of the ceremony, disclosed how she nursed a mistrust for private higher institution education system in Nigeria, before gaining admission into Achievers University four years ago.

She, however noted that Achievers University has proved her notion about private varsities wrong, due to the level of research and learning she was exposed to at the institution.

“Achievers University helped me to evade the incessant ASUU strikes and helped in continuing studies during the COVID-19 lockdown when my mates in public universities didn’t have the same opportunity.

“It has also given me the opportunity to step out of my comfort zone and fueled my search for knowledge outside the four walls of the classroom. I believe that the training my colleagues and I received in the past few years have shaped us in preparation for the Labour market, or ‘favour market’, as some of us would like to call it,” she said.

Earlier, the Vice Chancellor of Achievers University, Prof. Samuel Aje, thanked the parents of the inductees for entrusting their wards with the institution.

Prof. Aje noted that the inductees have been well trained to face the challenges of the 21st century.

According to him, the core mandate of the university; knowledge, integrity and leadership, he believed the graduating medical laboratory scientists would showcase them in their day-to-day lives.

Prof. Damen identified the academic environment as one area where they can choose a career path by studying up to PhD level.

He mentioned the hospital, tertiary institutions, research institutes, vaccines development and biological substance, biomedical engineering, entrepreneur and politics, as some of the areas they can venture into.

He urged the graduands, to as part of their post NYSC and internship lifestyle, invest in online certifications and training, and present themselves for opportunities that are available through networking with professionals.

The Pro-Chancellor of the University, Hon. Dr Bode Ayorinde, observed that the inductees are well trained and nurtured for the next phase of life.

Dr Ayorinde added that feedbacks received from their trainings at the hospitals and professional examinations showed that they will add value to the society.

He disclosed that the University is spending huge sum of money to give the Department a befitting permanent building.

The legal practitioner also promised to encourage the Best students with scholarships in order to study up to Masters level at the university.

Highpoint of the induction was the presentation of the 96 inductees to the public by the Head of Department, MLS, Dr Mrs Olabisi Oduwole.

Then was the administration of oath and presentation of license to them by the Registrar, Medical Laboratory Science Council of Nigeria.

They were also admitted into the Association of Medical Laboratory Scientists of Nigeria by its President, Prof. James Damen.