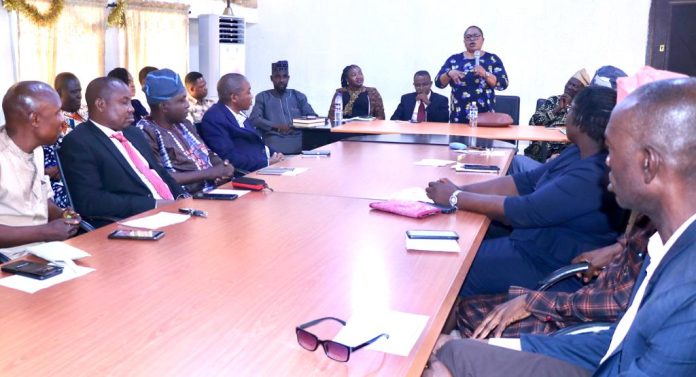 It was a moment of plethora of commendations and prayers from bosses, colleagues, family and friends of the Director of Planning , Research and Statistics in the Ondo state Ministry of Information and Orientation, Alhaji Ishaq Ismail Akinkunmi, as he bowed out from the civil service of the state.

The ace broadcaster retired having attained the statutory retirement age of sixty.

At his pen’s down ceremony held at the ministry complex, the State Commissioner for Information and Orientation, Chief (Mrs) Bamidele Ademola-Olateju took the lead to congratulate the director for his meritorious service to the state and equally appreciated him for his invaluable contribution to the ministry, stressing that he will be greatly missed for his good work and conduct.

She urged him to use his retirement to impart in the society the moral, values and good conduct which are predominantly lacking among the younger generations in the society.

The Commissioner who had earlier hosted the celebrant alongside another director that retired late last year, said it is a thing of joy for anyone to attain retirement age and pray God to be with the celebrant in retirement.

In his words of admonition, an Islamic leader, Alhaji Surajudeen Abdulazeez encouraged civil servants to outgrow the fear of retirement, as many opportunity abounds outside the service.

He said God is the greatest provider who can abundantly supply all human needs irrespective of status.

The Administrative Secretary of the Ministry, Mrs Toyin Onisile who was represented by the Director of Finance and Administration, Mrs Eta Ogunmoniwo, enjoined all to impart in others the great attributes learnt from the celebrants, adding that in doing so, the society will be better for it.

She urged the celebrant to prioritise living a healthy life in retirement, so that the society can continue to tap from his good conduct and wealth of experience.

Similarly, the retired Permanent Secretary in the state, Alhaji Kunle Sanni, eulogised the celebrant’s character and admonished civil servants to always shun laziness and avoid bending the rules, noting that the implication brings destruction to the system.

In his response, the celebrant who was moved by the gestures, appreciated all for celebrating him and urged them to always accept the lots God allowed in their way and there is no one that can be an impediment to another’s destined success.

He noted that the soothing testimony about him were heartwarming and revealed that he was able to exibit such characters, because he believed in doing the right thing without awaiting compensation or accolades from anywhere.

He thanked all his colleagues at every point in time and individuals who also rallied round him when he was moved to the ministry, stressing that he never regretted the development which gave him the opportunity to meet more people and achieve more feats in life.

Earlier, the well wishers among whom were his former colleagues at Ondo State Radiovision Corporation, OSRC, in their testimony had praised the celebrants for his great attributes describing him as a dutiful, reliable, tolerant, punctual, accommodative, confidant and blunt personality who is very honest in all his dealings.

They also extol him for being a great counsellor, responsible father and husband and for his religious tolerance and friendliness.

Among those who graced the event were management and staff of the ministry, Secretary of the Ondo State Signage and Advertisement Agency, OSSAA, Mrs Bunmi Adedayo-Oso, Director of News and Current Affairs, OSRC, Miss Nike Busari, Director of Alalaye FM, Mrs Bukola Ogunkua and the Director of Rural Development in the Directorate of Rural and Community Development, Mrs Olayiwola Epebinu.

Augustine Adeoye is a Press Officer in the Ondo State Ministry of Information and Orientation.