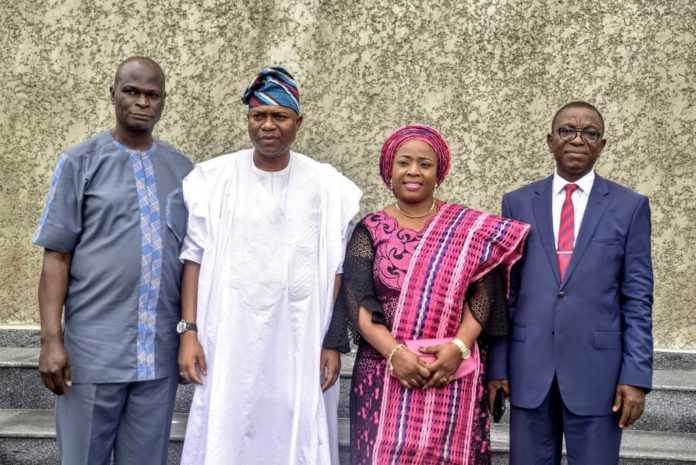 The Olowo-elect, Prince Gbadegesin Ogunoye, on Thursday bowed out of the state Public Service as Permanent Secretary, Government House and Protocol.

The Pen down ceremony signaled the commencement of his traditional rites, which begin tomorrow.

Prince Ogunoye became the Olowo – Elect after a successful selection process by the senior Omolowos and the final ratification by the kingmakers.

It was a moment of unparalleled glory for the retiring Olowo – Elect, as the people took turn to eulogize his virtues during his service to the state as a Public Servant.

The Head of Service, Mr. Dare Aragbaiye, described Prince Ogunoye as a dutiful officer who has transversed the length and breath of the civil service in the state.

He said those who have interacted with Prince Ogunoye in the course of his service would attest to the fact that he has contributed immensely to the building of the public service in the state.

He said: “History is being made today. For our elders who have been in the civil service for decades, this is the first of its kind. We have never had it this way in the history that a serving Permanent Secretary will be selected as a first-class monarch

“You will recall that Prince Ogunoye was selected by the senior omolowos and ratified by the king makers. We know him as a dutiful officer. He joined the Ondo State Civil service as far back as November 2001. He has traversed the length and breath of the civil service in the state

“His traditional rites begin tomorrow and he has to leave the service today. We have brought him here today to say bye bye. ”

The Permanent Secretary, Service Matters, Mr. Bayo Philips, described the Olowo-elect as a man with a clean bill from the service matters.

Mr. Philips said:”He joined the service in 2001. From service matters, I can say authoritatively that he is a man with a clean bill. He’s cultured and humane. Wherever you deploy him, he will go. Looking at him, you see a contended man. On behalf of the service, we want to appreciate you. You are ending today gloriously and you have brought honour to the service. ”

The Presiding Bishop of Reconciliation House, Pastor Joshua Oriyomi said the Olowo-elect left a testimony of integrity when he served with him in the Christmas Carol commitee in 2017 as secretary.

He said the retiring PS is a fine gentleman who is loyal and devoted, stressing that Owo is privileged to have him as a first class traditional ruler. He urged the Olowo-elect to uphold the tradition of his people.

Responding, Prince Ogunoye said he has garnered enough experience in the civil service over the past nineteen years which will surely help him in his new assignment.

He thanked the Governor for honouring him in the civil service, while stressing that his new job is to be a good representative of his people.

“It gladdens my heart to be here this afternoon. I’m happy that this is a special day created by God. As the head of service said, history is been made today. My journey in the Service spanned almost 19 years. I joined as an Administrative Officer in 2001. Prior to that time I taught briefly in a school in this state

“I have been cultured in the act of human relations. The civil service is a unique organisation and whoever is contented would see that the life of the public service is about service to the people. I thank God for allowing me to attain the highest position in the civil service. I must thank the governor who deemed it fit that I should be so honoured

“As an Olowo elect, coming to that level is never a tea party. People see behaviour and they may not comment instantly, but a day of reckoning is coming either positively or nagatively.”

Governor Oluwarotimi Akeredolu, SAN, represented by the Chief of Staff, Chief Olugbenga Ale, said the selection process of the Olowo-elect gave the comfort.

He said it is the most peaceful process in the history of the state, adding that its an achievement the government would love to claim.

The Governor said: “The process of your selection gives us comfort. It has never been like that in the history of the state. It’s the most peaceful process. It’s an achievement on our part as a government and we want to claim it

“We want to thank the senior Omolowos for the peaceful process and the kingmakers. We also want to thank the people of Owo, especially the youths who championed the course that this is what they want and they got it. By your training and exposure, we know we have a good leader in you.”