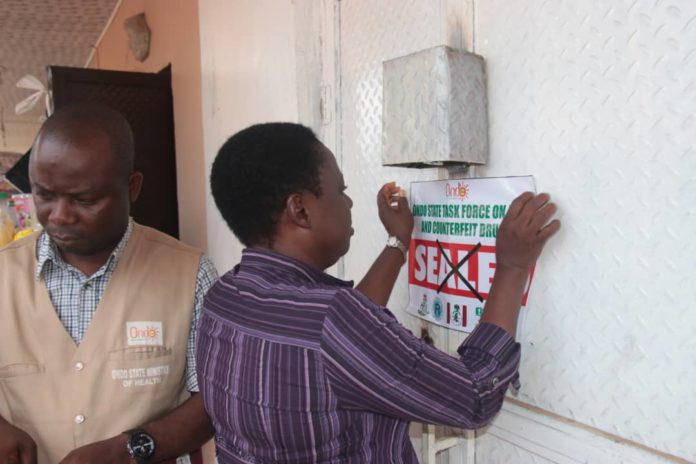 The Ondo State Joint Task Force on Fake and Counterfeit Drugs has clamped down on illegal Patent Vendors in Ayede Ogbese and Shasha Market and sealed off ten premises.

The Chairman of the Ondo State Joint Task Force on Fake and Counterfeit Drugs ,Pharmacist Olugbenga Lasekan who led the team to Ayede Ogbese and Shasha Market decried the recalcitrant attitude of most Patent Medicine Vendors in areas visited, as they open premises without recourse to rules of practice.

Pharm. Lasekan said by rules laid down by the Pharmacist Council of Nigeria (PCN), no medicine outlet should be opened without consulting the PCN for approval, premises should not be cited in Filling Stations, Markets, Motor Parks and Containers should not also be used as shops.

In his words, “Shops that open without following laid down rules and are not licensed are illegal, while Drugs without NAFDAC registration are fake.

“By the the Rules of Practice, according to him, Patent Medicine Vendors have list of drugs they are permitted to sell, which does not include Antibiotics, Injections and Control Drugs.

People in the words of the Chairman are not allowed to hawk drugs because the drugs are supposed to be stored under certain temperature which the practice of hawking violates thus making the drugs dangerous for human consumption. He added that that the State has zero tolerance for fake, adulterated and unwholesome products as well as illegal premises and will not rest on its oars until the state is ridden of defaulters.

He warned that the State will not hesitate to prosecute recalcitrant vendors and association leaders who aid and abeit illegality, while advising vendors to go and obtain their Licenses from PCN, to avoid constant harassment and embarrasment.

Pharm. Lasekan expressed delight at the success made at the outing ,as he said the right signal has been sent, that the State has zero tolerance for illegality.

He advised residents to always buy their drugs from licensed Patient Medicine Vendors or Pharmacies.

Control drugs found in possession of Patent Medicine Vendors visited were confiscated while a total of ten shops were sealed off by this Joint Task Force on Fake and Counterfeit Drugs which comprise of the Ministry of Health, NAFDAC, NDLEA, PCN and the Nigeria Police Force.