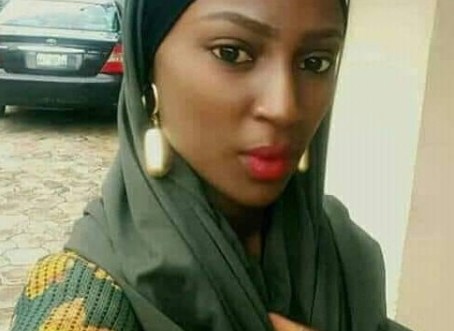 More facts have emerged on the circumstances that led
to the gruesome murder of a young female banker, Nofisat Adetutu Ibrahim who was on Wednesday evening shot dead by yet to be identified gunmen at her OkeOgba PoS kiosk in Akure, the state capital.

On Wednesday, Adetutu was shot dead by some suspected hired assassins who came on motorcycle (Okada) at about 7pm, leaving many residents of OkeOgba, off Agagu Road, Akure to wonder if it was an incident of armed robbery.

Adetutu, daughter of a former Principal officer of the Ondo state-owned Rufus Giwa Polytechnic, Owo (RUGIPO), obtained a National Diploma (ND) in Mass Communication from the Polytechnic and a BA in the same course from Adekunle Ajasin University, Akungba-Akoko (AAUA) and after her NYSC, she joined the banking sector where she worked based on contract-in-charge of the Point of Sale (PoS) ordering at First Bank PLC.

A family source who is an elder sister to Adetutu, however explained that the deceased money was not stolen by her killers which purely shown that it was not a robbery case.

The source alleged that a female customer who is a popular Businesswoman at Oja-Oba Akure, had been threatening Adetutu for about a week over a disagreement on the location of PoS by the First Bank PLC that she was working with before her death.

It was learnt that the Businesswoman was alleged to be insisting that the Bank should approve a PoS location for her at a place where there was an existing one, a request Adetutu felt contradicted the regulations of the Bank and she rejected the woman’s request.

“The rejection was said to anger the Businesswoman and started to threaten Adetutu and infact in the morning of the sad day, she allegedly reported the ‘threat to her life’ at Fanibi police station, but unfortunately her life was taken in the (Wednesday) evening.”

The family source dismissed insinuation that she was killed by armed robbers, insisting that hired assassins took her life.

When our Correspondent visited Fanibi Police Station on Friday morning, SUNSHINETRUTH observed that one of the prime suspects alleged to be threatening Adetutu before a death, was in the custody of the police for quizzing apparently to help investigations over the alleged murder case.

Similarly, a Branch Bank Manager (name withheld) was also apprehended by the police on Thursday morning but he was later released in the evening of the same day after questioning.

It was also gathered that the Bank Manager was aware of the disagreement between Adetutu and the woman over location of PoS and also aware of the threat to life prior the killing of the lady.

One of her former course-mates at RUGIPO, posted on his Facebook page that, “we shall be holding the the police for their words as we all join them in unraveling those behind this dastardly act.”

“I was told that her assailant (s) who came in a motor – bike disguised as customers lurking to transacts business in her terminal.”

“They first attempted to strangulate her but she bolted – to raise an alarm, and as she ran out to escaped death, the armed men went after her and was shot twice on the b***st.”

“These hoodlums left with nothing in the shop as there money and other valuables – raising the suspicion that they must have been “hired assassins” working in the dark.”

“The gun shot fired by her murderers had made business owners and traders in the area to ‘ve thought it was a case of armed robbery. Not, it is “pure assassination” with our findings so far!”

“The issue was about a business woman close to her bank who was alleged to have threatened to deal with Tutu over some disagreements on the issuance of PoS machine.”

“This, according to her elder sister was reported to her boss in the bank mostly the “Manager” who only did not take the as a serious case or did less to Tutu’s report in the office.”

“Sad! Tutu has been buried in accordance with Muslim rites but her killers must not go freely. She need justice ‘cus her killers have murdered sleep in the face of her parents.”

“I learned that the case has been reported at the Fanibi Police Station in Akure but seems the Divisional Police Officer (DPO) in Charge of the Station, Omolayo Adams, is trying to play ball!”

“We are yet to know if this is unconnected with the highly influential suspects that have been fingered in the murder case by the family,” the former Course-mate lamented.

Confirming the incident, the Police Public Relations officer (PPRO) for Ondo state Command, Mr Femi Joseph said police detectives had been deployed to unravel the circumstances that led to the untimely death of the 29year-old lady.

Joseph vowed that the “perpetrators would soon be arrested and brought to book”.