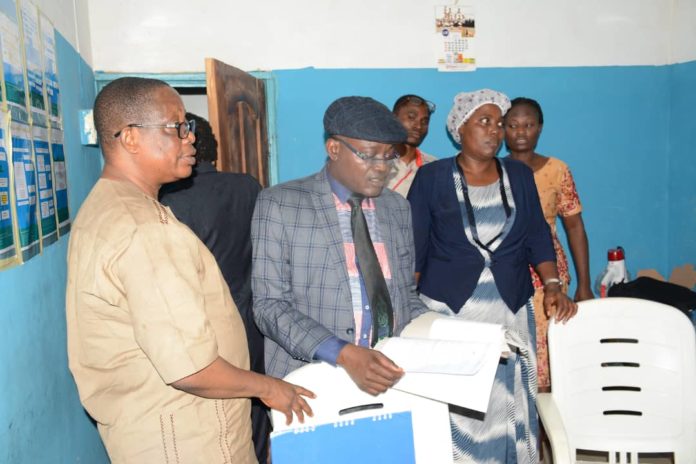 Towards safeguarding the health of residents of the state and ensure that they get minimum standard health services, the Ondo State Government is set to sanitise the health sector.

Officials of the Ondo State Ministry of Health led by the State Health Commissioner, Dr Wahab Adegbenro closed down eight facilities in the process, for various offences.

Seven others were warned for non compliance to rules of practice and engaging in unprofessional conducts.

The Commissioner for Health, Dr Wahab Adegbenro read the riot to the violators during a monitoring exercise of the Ministry.

Dr Adegbenro warned that the government will not allow any one not ready to play the game accordingly to the rules toy with the health and lives is the people.

In one of the unlicensed facility visited called Phobia Medical Centre which was among those that were sealed off, was a traditional medicine practitioner who was found admitting and treating patients in the orthodox way thereby endangering the lives of unsuspecting patients.

The man on sighting the team, fled the centre to avoid being arrested by the police.

There were also some centres with Quacks, called Auxiliary Nurses, a practice which Professionals Medical Bodies and the Government are against.

Speaking further, the Health Commissioner, Dr. Wahab Adegbenro, frowned at unprofessional conducts of some of the hospitals visited, said Government would not allow quackery to thrive in the State’s health sector.

He noted that the action of the Government was not to witch hunt, victimise or send any one out of job, but to ensure that minimum standards are put in place by Healthcare providers to avoid jeopardising the lives of patients.

He enjoined anyone interested in the health profession to get trained at accredited institutions and be certified while adding that any unlicensed facility will be closed down and perpetrators prosecuted.

He also admonished Patients and their relatives to look out for the practising license of any centre they are to patronize (unusally pasted conspicuously on the wall) .

He warned them to be careful of putting their lives in the lives of quacks who can worsen their health situation rather than improving it.

Also speaking, the Ministry’s Permanent Secretary, Dr Dipo Durojaye said Government was ready to provide all the needed support to flush out quackery in the sector and advised those interested in practising,to pursue their career at institutions accredited by the Government and Professional bodies.

He further warned professionals who repeatedly fail to comply with the minimum practice standard or indulging in unprofessional conducts to desist, threatening that they will have Their centres sealed off .

The Director Hospital Services, Dr Richard Adesoji who led the team to most of the facilities visited, raised alarm about the rate of quackery in the State.

While advising those that want to open health facilities to visit the Ministry and start on the right note, he warned that the government will not rest on its oars until the state is ridden of quacks.