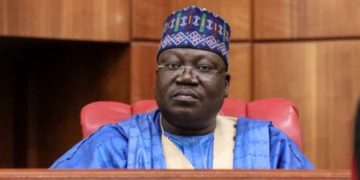 President of the Nigerian Senate, Ahmad Lawan, has condemned what he described as attempt to return the country to a regional system of government.

Lawan, who spoke while paying tribute to late Senator Benjamin Uwajumogu, in Abuja, said the Senate will continue to work to ensure a united country.

He said that the late Uwajumogu worked for a country where citizens can live freely, their ethnicity or religion notwithstanding.

Lawan said: “Ben was something else, when there was crisis he would preach that we should unite and that we are one as a Senate.

“He remained the same person up to the last day he contributed to his last debate which has been referred by our colleagues.

“In that debate, he urged the government to stand up for her citizens wherever they may live.

“We want to ensure that there is serious unity among Nigerians. The recent tendencies of going back to regionalism and provincial tendencies will not take Nigeria anywhere.

“When we have serious confrontation, we face them as a united people.