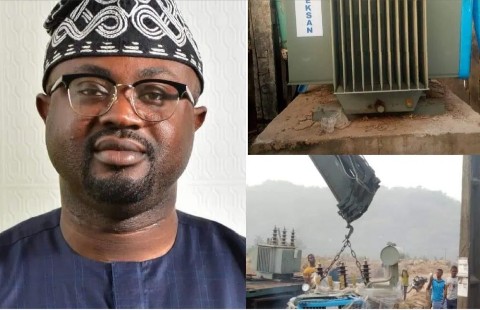 It has been a year since Hon. Olubunmi Tunji-Ojo was elected on February 23, 2019, as a Member representing the people of Akoko North East and North West Federal Constituency in the House of Representatives, but that is not the gist. The main gist is the fact that the last 365 days has been a world of achievements and accompliments for the star boy called BTO.

Of a fact, Hon. Olubunmi has redefined representative democracy by his strides and undertakings in a manner that has caused many, including his admirers and staunch critics to marvel. His accomplishments and impacts as a member of the House of Reprentatives has been so effective that his so much that, Akoko, where he hails from, has been steadily in the news in the past one year.

Yet he prioritises giving scholarships to students at all levels which he has since been doing. Others are empowerment for artisans and traders, and unprecedented cares for traditional institutions. The entire space of Akoko land became a spotlight because of the emergence of a solid son that has been a pride to all and sundry.

It terms of rural electrification, Honourable Ojo is also making impact. He donated a 500 KVA transformer to Ilepa Street, which was located at the NTA junction in Ikare-Akoko. This area is where the residence of the former member of the House of Representatives, Honourable Gbenga Otolorin Elegbeleye is located, as well as a former Speaker of the Ondo State House of Assembly, Right Honourable Taofeeq Abdulsalam. According to Honourable Ojo, more of such gestures are coming.

One major project that is dear to the people of Akoko is the Awara Water Project. It is a project that holds many promises for the people, but it’s yet to operate at optimum capacity because it has not been completed. But there is hope in the horizon, as BTO is seeking a lifeline for the Awara Water Project. He has promised to bring national attention to the project, vowing that very soon, people of the two local government areas will begin to enjoy potable water, just like the old times, when children usually go to taps on the streets to drink water with their hands after school hours.

Another major one is the road network in Ikare-Akoko, the commercial nerve centre of the whole of Akoko land. In the past, the ancient town has only one road, leading from Akure, through Akungba-Akoko. But Honourable Bunmi Tunji Ojo has changed the narrative. He ensured that Ikare town can now boast of two roads. There is one that links the check point in Oke-Igbege, down to Oyinmo, Ode-Iyare, Okoja to Olukare’s palace. This road serves as a short route to some parts of the town, unlike before that people have to take Oke-Igbegede, which is a long journey.

Honourable Bunmi Tunji Ojo has also brought his vision to bear on employment opportunities for the teeming youths of Akoko. He has facilitated employment for some people at the NDDC and many Federal Government agencies. Apart from this, he has over 200 aides working for him. The amount of money he spent on the salaries of these aides alone is almost 9 million naira every month.

In order to promote inclusivity considering the diversity in his Constituency and to engender a pragmatic sense of belonging, BTO appointed over 200 aides. In addition to facilitating job opportunities for competent and qualified people across board, BTO is about to raise over 100 millionaires as you read because over 100 farmers (youths) are about to be empowered with 1million naira each to expand their agricultural enterprises.

Over 30 groups have been invited to Abuja on courtesy visit(all expenses paid) to the National Assembly, an experience they might not have had or may never have again. These various groups comprises religious, social and political leaders, including the executives of the Noble APC Youth League. He has also been meeting with his constituents in their different groups in Abuja as a to further enlighten and expose them. It is called effective representation.

BTO has proven himself to be one of those who have pursued tireless the vision of late Chief Obafemi Awolowo in politics. He believes and sees politics as call to serve and not to be served. He has a strong view that power should be used for the transformation of the society and development of the people. His view for seeking power is consistent and relentless search for tranformational ideas and policies that will transform the lives of the people of his constituency.

Within his first year in the green chamber, he has touched the lives of his people positively by bringing to them the dividends of democracy. He performance has raised many questions in the minds of his constituents on why his predecessors have not been able to do what he has done. They all they had heard from them were endless stories and no tangible dividends of democracy. Those who spoke with Triangle Magazine said the achievements of BTO within one year in office has surpassed all the achievements of his predecessors since 1999.

BTO did not just happen on the political space like some star that lost its bearing within a galaxy of stars; he methodically planned his way up the ladder. And like they say, fortunes favor the prepared. Even the revered Lord Denning once deposited that you cannot build something on nothing; it’s bound to collapse. BTO’s meteoric rise is tied to a solid foundation. His is not a happenstance.

Armed with a top-notch education from London Metropolitan University, United Kingdom where he bagged his first degree in Electronic and Communications Engineering and second degree in Digital Communications and Networking from the same university, BTO, a certified Ethical Hacker, has also made giant strides in the business world to the extent that he once had an award of Business Excellence conferred on him.

Beyond his immediate Constituency, BTO is also reaching out to citizens. Lately as a result of the Covid 19 pandemic challenge, the great guy extended cares to the constituents Ilaje/Ese-Odo Federal Constituency in Ondo state — constituting the mandate areas — with over five hundred (500) palliatives to cushion the effect of the unfortunate pandemic.

Little wonder other opinions have described him as a relatively young man bestriding the political landscape of Nigeria in general and Ondo State in particular like a colossus. Some say he is the beautiful bride of Ondo State politics as he is at home with everybody regardless of their political persuasions and tendencies. To BTO, everyone is his regardless of the tribe, religion and political beliefs of the person.

If within this short time as an elected parliamentarian in the Green Chambers of the National Assembly on the platform of the All Progressives Congress(APC), BTO has etched indelible imprints in the sands of time to the admiration of his legion of fans and supporters, and become a voice to be reckoned with in the hallowed chambers of the House of Representatives, then we can rest assured that the future would be greater.

Femi Salako is the publisher of Triangle News Magazine