Bello Matawalle, Governor of Zamfara, on Tuesday officially defected from the Peoples Democratic Party (PDP) to the All Progressives Congress (APC).

He announced his defection to the APC in at a special grand rally to receive him to the party, organised by the National Caretaker Committee of the APC led by Governor Mai Mala Buni of Yobe State.

Matawalle, who became the governor of Zamfara following a Supreme Court judgement on the internal squabble that rocked the APC primaries in 2019, expressed delight after being received into the party.

“As from today, I, Bello Matawalle Maradun, governor of Zamfara, am happy to announce my defection from the PDP to the APC. As from today, I am a full APC member and leader of APC in Zamfara.

“I am calling on all APC stakeholders in the state to join hands with me to build the party and move the state forward,” he said.

However, in 2019, the Governor vowed not to leave the PDP, calling on God to punish him if he decided to leave the party.

In a video obtained by SaharaReporters, Matawalle was heard saying in Hausa, “If I ever betray PDP, may I not live in peace for the rest of my life, I swear by Allah.

“If I can leave PDP or cheat any of our members, may Allah punish me.” 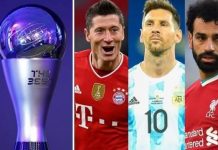