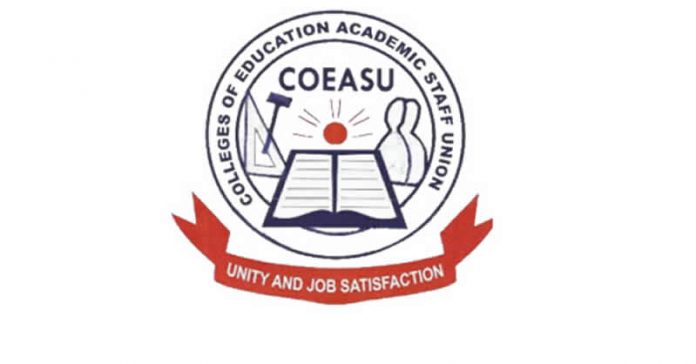 The Provost, Adeyemi College of Education, Ondo, Dr. Samuel Akintunde has received an award for his exemplary and selfless services to the college of education system from the Colleges of Education Academic Staff Union (COEASU).

Addressing the delegates before conferring the award on Adeyemi College’s provost and others, the outgoing president said that the recognition of the college’s administrators had been assessed and deemed fit for the awards in their exemplary services to the system.

Speaking about other recipients and awardees of the COEASU National recognition, Ogirima commended the former NCCE’s Director of Personnel and Management, Hajia Jumai Suleiman for moving her staff towards efficiency in service of the commission.

Ogirima specially acknowledged the attention the Governor of Jigawa State, Alhaji Muhammed Badara (MON, mni) to the challenges besetting the College of Education in his state.

“He did not just attend to the needs of COE, Gumel. He visited, inspected facilities in the College and ordered repairs and provisions of requisite infrastructure – College road network, students’ hostels, staff quarters – in recent times,” he stated.

He further said, “It will interest all to note that he also personally intervened in management-labor frosty relationship overtime.”

“The import of this, of course, can be drawn- out when one compares with such state, who merely pay lip services to COE’s and their counterpart whose workforce have abysmally not only mutilated salaries but irregular payment of legally earned emoluments.

The COEASU outgoing president maintained that this informed the union’s consideration of Governor Badara as a fellow of COEASU.

He also used the opportunity to appreciate the Minister of Education, Mallam Adamu Adamu, for the symbiotic relationship, which has just taken its root in government- COEASU relationship and called for an urgent further radical engagement towards getting quick conclusion of the lingering issues.

Ogirima revealed the outstanding issues as the renegotiation of COEASU-FGN agreement, the implementation of the NEEDS assessment in COE’s, the staff of demonstration schools and to the effect of mainstreaming them to elicit greater commitment to service delivery.

Speaking shortly after his inauguration, Dr. Smart Olugbeko expressed great appreciation to all the comrades who worked assiduously for his emergence as  national president and commended past leaders of the union for taking it to an enviable height.

To sustain the pursuits of addressing diverse challenges facing the union and its members, Olugbeko declared a seven- point core values of responsible unionism through which his administration would be guided to include Accountability, Transparency, Objectivity, Equality, Synergy, Open-Mindedness and Commitment.

“The time is now ripe to rejig our system and brace up for the daunting challenge of rectifying government’s willful neglect of the Colleges of Education, as evident in the highly-skewed student-lecturer ratio, infrastructural decay, poor remuneration for diligent services by our members, the inherent challenges with IPPIS implementation, employment of academic staff without finalization of the FCE’s Establishment Act, he urged all stakeholders.

He revealed other challenges of outsourced services, non-funding of governing council meetings, non-payment of minimum wage areas, problems associated with accessing pension as a result of management’s incursion into union’s affairs as well as persecution of union leaders and suspension of union activities especially in state colleges are also additional areas of concern to our Union.

Olugbeko promised that his administration would operate an open-door policy and collaborate with provosts of colleges of education for a robust union-management relationship.

He, however, called on chairmen and secretaries to realize that “provosts are premier members of the union and should be treated with utmost respect,” maintaining that while developing a synergy it should be devoid of compromise for the progress of the colleges of education system.

The Chief Lecturer and former Dean, School of General Education at Federal College of Education, Okene, who is currently on sabbatical at Adeyemi College, maintained that “until the leadership question is properly tackled head-on peace, progress and development may remain a mirage.”

In his remark, the NCCE’s Executive Secretary, Prof. Paulinus Chijoke Okwelle described the position of COEASU as a great one in the education sub-sector as a producers of teachers and moulders of society.

He commended them for ensuring that the colleges of education enjoy peaceful co-existence through employment of dialogue in resolving all union related issues.

He also commended the Ogirima-led outgoing executives, as he appealed to the incoming executives to surpass the achievements of their predecessors.

The Executive Secretary also congratulated the recipients of awards and recognitions, and noted that the award is a call for more work and services to their community.