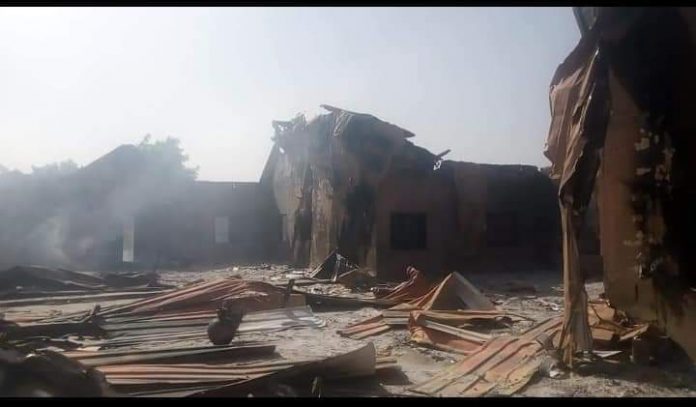 Chibok came into spotlight when about 300 schoolgirls were abducted in April 2014 by Boko Haram. Some of the girls escaped, others were released after ransom payment, and over 100 of the girls remain unaccounted for to date.

Ahmed Jaha, a member of the Federal House of Representatives, confirmed that 16 persons “comprising 15 girls and a male resident of Piyemi village were abducted by the terrorists.”

Jaha said the attackers had also burnt several houses and shops “after looting them of foodstuff and related valuables.

“They killed three persons, including the chief hunter of the area who was beheaded,”  he said.

The lawmaker also confirmed that about 25 girls were initially abducted before some of them later escaped.

“Initially, we had 17 girls missing, but I can confirm to you authoritatively now that we now have 15 girls and one male person that have been taken away by the terrorists,” he said.

“They burnt a total of 21 houses and shops after looting them of their belongings.”

The lawmaker also confirmed an earlier attack on Kautikari, another villager not far away from Chibok. Three persons were killed by the terrorists who burnt houses after the food and valuables of the poor villagers were looted.

Mamman Kwari, a resident of Chibok, said the terrorists had also burnt ten vehicles and more than a dozen houses before leaving the village.

“On the way out of Piyemi, they also abducted three girls who were riding on a Keke-Napep (commercial tricycle) after shooting and killing the male rider. That brought the number of persons abducted to 19. We heard that the number would have been more than this had some of the girls not escaped,” Kwari disclosed.

During the attack, they mainly looted homes and set them on fire. The assailants killed three persons and destroyed several houses.

Naomi Musa, a resident of Chibok, told HumAngle on the phone that  “when Kautikari was attacked, three persons – namely, Joseph Sangula, Ayael Yerima and Friday Abdu Pogu were killed by the terrorists who looted the community of their money, food and clothing before setting many homes on fire.”

The Borno lawmaker who represents Chibok, Damboa, Gwoza Federal constituency blamed the recent “upsurge” of attacks around Chibok on lack of adequate protection for the communities.

“You know Chibok is one of the few local government areas where we the people live in their respective communities. And the entire local government borders Sambisa Forest on two sides; that alone makes them more vulnerable,” he said.

“There is a serious need for the military to ensure adequate deployment of troops to protect those areas because Chibok can be attacked from different angles. The Nigerian government must understand that the people of Chibok are still living in their various communities under daily threats to their lives and property.” (HumAngle)