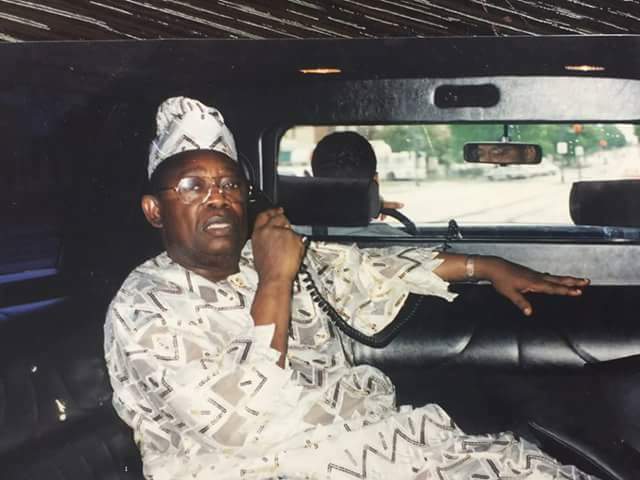 The winner of the June 12, 1993 presidential election late Moshood Kashimawo Abiola was having a meeting with a delegation from the United States the day he died.

Former Head of State General Abdulsalami Abubakar stated this in an interview with Trust TV at the weekend.

The former Head of State said this is in contrast with the insinuations that the late business mogul was poisoned.

Rather, he said he died after falling ill while receiving a delegation from the United States of America.

Abiola died while in detention after he was incarcerated by the late Sani Abacha regime. He died on July 7, 1998 when Abdulsalami Abubakar was in power.

According to him: “Well, I smile because there were lots of allegations here and there that we killed Abiola. As always when I am talking about late Abiola, I still thank God for directing me on things to do when he gave me the leadership of this country.”

“On the day Moshood Abiola passed away, may he rest in peace, two to three things make me always say I thank my God for the guidance He gave me.

“One was I received a delegation from America headed by Pickering who was then, I think, the secretary of state or so. In his team I remember very well, was Susan Rice. I remember her very well because of the role she played later.

“So after the normal courtesy and discussion we had, when they were leaving my office, Pickering said “Your Excellency we made a request to see Moshood Abiola but we were denied”, so I said “Why were you denied? who denied you?” There and then I made a decision, I said “Look, you will see Moshood definitely, I overruled whoever said you cannot see him”. So I now called my chief security officer, I said “Please make arrangement for this team to see Abiola,” that is one point.”

“Now during the incarceration of Moshood Abiola, except his personal doctor, to my knowledge, no member of his family saw him. So when I became head of state, based on consultation and interaction together with Ambassador Babagana Kingibe, I gave the family a date that they could come and see him.”

Recalling the incidents on the day MKO died, Abubakar said: “So a day before he died, his family came to Abuja to see him. For one reason or the other, the whole family could not see him at the same time, so it was agreed that when this group of his family will see him today, tomorrow the next team will see him.

“So they saw him like yesterday, now this team from US came to see me and I said they could see him. Normally it was in the evenings the family go and see him. So because I had authorized the American team to see him, so the other part of the family were waiting to see him.

“Then my security chief called and said “I have bad news for you”, I asked what it was, he said “Abiola is dead”. I was shocked. He told me he was there with the American team, at that time I was staying in the barracks, I had not moved to the villa, so I said okay, let him take the American team to my house, I will meet them at the house; so I closed from the office, and went there.”

“The issue now was how do I break the news to Abiola’s family and how do we tell the world Abiola had passed on. I must be thankful to God and again to Ambassador Kingibe because we called on him and asked him to bring the family of Abiola. So when they came I broke the news, that unfortunately this is what has happened.”

“As you would expect, the family broke down and they started crying, I can’t remember which of the ladies, I held her, she was crying, sobbing, it was then Susan Rice, that is why I always remember her, said “Mr President that is not your job, let me do it”, so she now held this lady until she settled down and she calmed down a little bit.

“Then we had to summon my second in command and other people and then strategized on how to break the news.”

“That is why I always say I thank my God for guiding me, if I hadn’t said the American team should go and meet Abiola certainly I don’t know how I would explain to the world that Abiola had died, and the American team will they believe me that we had not killed Abiola at that time when they were requesting to see him?”.