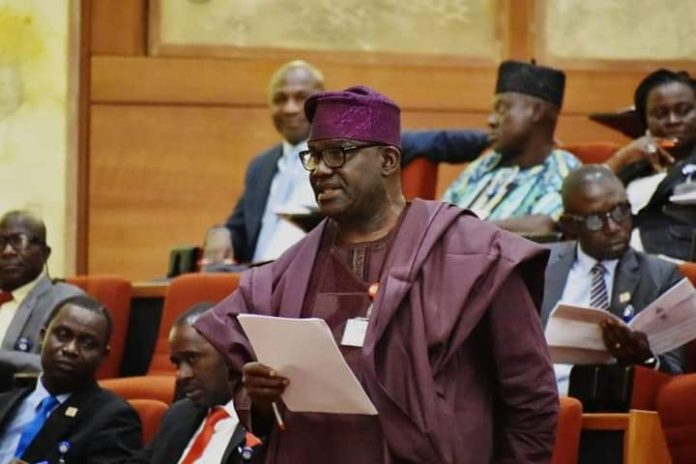 Senator Ayo Akinyelure representing Ondo Central at the National Assembly has again distributed another round of employment letters to youths in the district.

This is contained in a statement at the weekend by Charles Akinwon, SA (Media & Strategy) to the Distinguished Senator.

“In doing what he knows how to do best, the Senator representing Ondo Central in the National Assembly, Distinguished Senator Ayo Akinyelure, yesterday afternoon (Saturday) distributed another round of appointment letters to some youths in Ondo State.”

Addressing hundreds of youths who had come for their employment letters in his Constituency Office, located at Oba Afunbiowo Housing Estate, Akure, Akinyelure congratulated the beneficiaries.

“If your name has not come out today, don’t lose hope as another round of employment letters will be distributed again before the end of this month,”

Akinyelure however urged those that had not submitted their Curriculum Vitae to do so in his Constituency Office, as he said employment of youths in Ondo State, particularly Ondo Central has always been his agenda.

The Distinguished Senator used the occasion to further emphasize that the youths should get their Voters Card in readiness for the 2023 elections.

Responding on behalf of other beneficiaries, Kunle Adeoye, from Akure South, said, “the entire youths of this state are overwhelm with what Senator Akinyelure is doing. I have graduated over four years ago without any job but riding Okada. But today, Akinyelure has brought joy into my life and lives of hundreds of other youths. Sir, we are most grateful”, Adeoye concluded.

Meanwhile, Akinyelure has assured the people of Ondo Central that he would always improve the living standard of his constituents. He said this while inspecting the Akure/Idanre road construction he had initiated as part of his Constituency project.