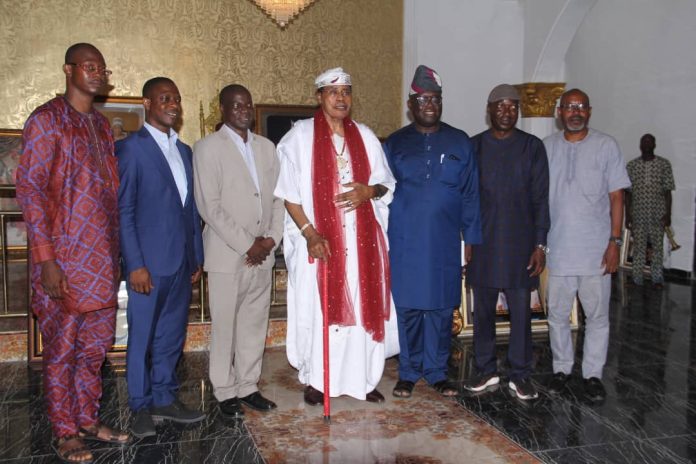 The traditional and paramount ruler of Ugbo Land and Chancellor of Olusegun Agagu University of Science and Technology, Okitipupa, Oba Dr. Fredrick Akinruntan, has assured the new Vice-Chancellor of OAUSTECH of his support to actualize the vision of developing a blue economy for the coastal region where the institution is strategically located.

The Chancellor gave the assurance on Thursday, 3 March, 2022 when the new Vice-Chancellor paid him a courtesy call in his domain as part of his familiarization tour of the institution’s critical stakeholders and host communities. It was the first official visit of Professor Temi Ologunorisa since his assumption of duty as the University’s Vice-Chancellor on 23 February, 2022.

The well-travelled monarch commended the brilliant Professor of Climate Science for the visit and for presenting his agenda to move the University forward, saying he would do every necessary thing to ensure Prof. Ologunorisa succeeds in his dream for the University.

He assured that he would consider his proposal for establishing a Campus to house the proposed School of Maritime Transport and Logistic in Ilaje Local Government Area of Ondo State in order to develop the area.

He further promised to set machinery in motion for the Vice-Chancellor’s proposal of mounting a Centre to run an annual lecture series in the name of his imperial majesty in the university to provide cultural enlightenment.

Oba Akinruntan commended Prof. Ologunorisa for the sacrifice he made to come to contribute his quota to the development of the coastal region and the passionate manner he presented his agenda for harnessing the resources of the environment to develop the blue economy of the region.

The Chancellor said he was very pleased by the visit and the event had made the evening a happy and memorable one for him. The elated monarch said he would adopt Professor Ologunorisa as his second adopted son.

Earlier, Professor Ologunorisa had passionately and brilliantly presented his vision for taking the University to greater heights by mounting courses that are capable of transforming the economy of the coastal region where the institution is located.

He assured the Chancellor that he had come to contribute his quota as an indigene of Ondo State to the University of Science and Technology as an international professor of climate science, bringing to bear his international experience and contacts to catapult the university from being a local player to an international player in developing a global economy for the region.

He asserted that he had made contacts with the Vice President of Kingston University in Jamaica to pursue an earlier MOU which OAUSTECH had signed with the institution but abandoned to facilitate an exchange programme between the two institutions in running maritime courses.

“I have made contacts with the Vice President of Maritime University, Kingston in Jamaica to revive the MOU the University had signed to develop human resources in nautical science, maritime transport and logistics,” he stated.

He added: “Our students will start their maritime studies in OAUSTECH in Nigeria and complete them at the Maritime University in Jamaica to give them competitive advantage in the global labour market.”

Professor Olukoya Ogen, the adopted first son of the monarch, facilitated the courtesy visit of the new Vice-Chancellor, to the palace of the Olugbo.

The erudite professor of history had described, to the revered monarch, the new OAUSTECH VC as a brilliant international professor, whom he proudly identifies with and believed would transform the institution.

Others were high chiefs of Ugbo Land who joined the paramount traditional ruler in welcoming the Vice-Chancellor to the Palace for the visit.