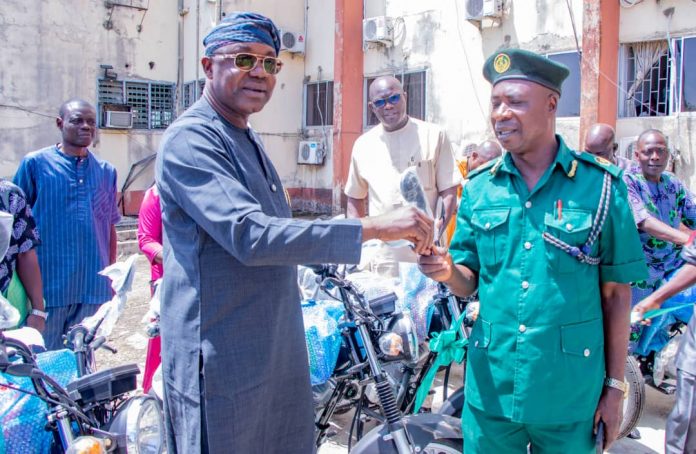 As part of efforts to boast the morale of forest guards in the state for efficient performance, the Ondo State government has handed over first phase of motorcycles to the security arm of the forest management.

Speaking while handing over keys of the motorcycles to the Headquarters Chief Ranger, Mr. Raphel Adelusi, the state Commissioner for Agriculture and Forestry, Mr. Olayato Aribo thanked the state Governor, Arakunrin Oluwarotimi Akeredolu for graciously approving the money for the procurement of the motorcycles for the forest guards.

His words: “I want to use this medium to appreciate Mr. Governor for granting our request for the purchase of motorcycles for our foresters, these working tools provided, will go a long way to help monitor, patrol and make the job easier”

The Commissioner stated that the procurement and handover to the officers was in furtherance of the state government’s commitment to effective operations of the forest guards and community policing in the state, which is aim at ensuring that the forests remain secure and peaceful for people operating legally in the forests

Mr. Aribo stressed that adequate manpower and support would be given to the rank and file Officers to perform optimally, adding that activities of encroachers would be curtailed.

Also speaking, the Administrative Secretary, David Adesina, esq said the motorcycles would aid monitoring activities in the forests and curb smuggling of logs, which he said would boost the revenue drive of the ministry.

He, therefore appreciated the governor for granting approval for the purchase of the motorcycles, noting that this was the first phase and more motorcycles would be procured for the officers.

Mr Adesina added that the motorcycles would assist officers to operate easily in the forests especially during this wet season, stressing that it is usually difficult for foresters to patrol and monitor activities going on in the forests during rainy season because of the terrain. “With these motorcycles, our men are ready to protect, monitor and patrol our forests”. He added

Omoboyowa, is the Press Officer, Ministry of Agriculture and Forestry.