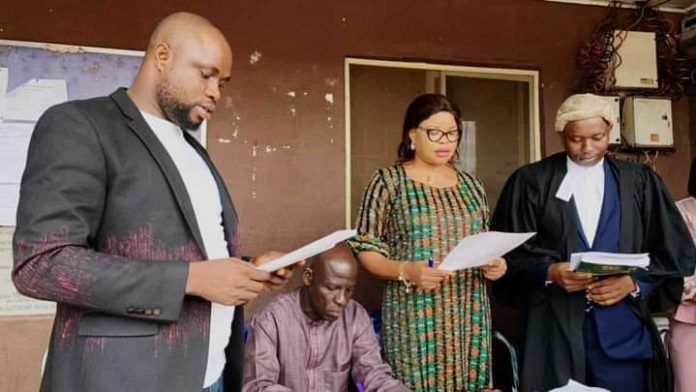 Radio Nigeria journalist, Leke Adegbite, has been sworn in as the new Chairman of the Nigerian Union of Journalists, Ondo State Council.

Adegbite was sworn in alongside other state executive members to lead the union for the next three years.

Others sworn in were Hakeem Gbadamosi of the Nigerian Tribune as the vice Chairman, Ngozi Aduloju as the assistant secretary, Fatima Muraina of the Hope newspaper as the treasurer, and Lawani Arinmola as the Financial secretary.

The swearing ceremony was performed by the NUJ President, Comrade Chris Isiguzo represented by his vice president, B zone Mrs Ronke Afebioye-Samo under the supervision of a legal professional, Iyiola Afolabi.

Performing the swearing ceremony, Comrade Isiguzo urged the new executive to be magnanimous in victory.

He also urged the new Chairman, to reach out to all parties and be a leader of all members regardless of who they supported during the election process.

In a remark, the Chairman, Nigeria Labour Congress, NLC, comrade Sunday Adeleye, promised that the labour Union would continue to support NUJ in all its activities.

In his acceptance speech, the new Chairman, Nigeria Union of Journalists, Prince Leke Adegbite promised to prioritize welfare and training for all members.

Prince Adegbite also promised to reposition the Union to be more enviable and become a union that all members would be proud of.

Highlight of the swearing in ceremony was the reading the oath of office by all members of the new State executive council of ondo NUJ.