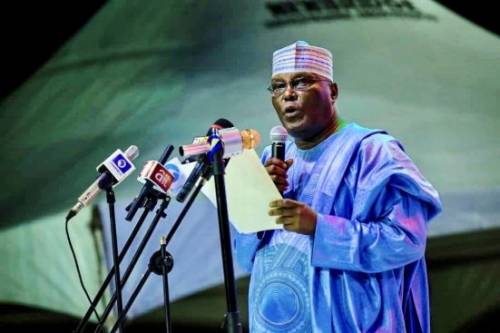 A former Vice President and a presidential aspirant on the platform of the People’s Democratic Party, PDP, Alhaji Atiku Abubakar has promised to unify the people of the country if voted into power in 2023.

Alhaji Atiku made the promise when he met with delegates and leadership of PDP in Ondo State at the party secretariat in Akure, the state’s capital.

The PDP aspirant decried the general situation of the country especially marginalisation, insecurity and economic backwardness.

Alhaji Atiku pledged to begin with economic and security reformation where he would increase the number of police and the military with thorough backing.

Appreciating hitherto efforts of the people of Ondo state towards his political aspiration, Alhaji Atiku also pledged adequate funding of public education to university level as well as restructuring of the country

In his welcome address, the State’s PDP chairman, Alhaji Fatai Adams said the Party members believed in Alhaji Abubakar’s capacity and that such would be demonstrated by their votes

Similarly, the Governor of Bauchi State and a Presidential Aspirant on the platform of People’s Democratic Party, PDP, Senator Bala Mohammed has called on Nigerians to put aside the issue of ethnic and geographical sentiments when choosing the next President but rather a competent and detribalised leader like him.

He made this remarks while addressing Ondo State delegates of the PDP at the Party’s Secretariat in Akure.
The event had in attendance PDP stalwarts in the State which include Mr Eyitayo Jegede SAN, Ambassador Omolade Oluwateru, Senator Ayo Akinyelure, the State chairman of the party, Hon.Fatai Adams, Former speakers of Ondo State House of Assembly, RT.Hon Bakita Bello and Jumoke Akindele; among others.

Senator Bala Mohammed who is moving round various States of the federation, was in Akure to woo PDP delegates on becoming the Presidential Candidate of the party.

The Bauchi State Governor added that Nigeria needs to be restructured. ” To me, restructuring is about good governance,it is about the reconstruction of the Nigerian federation in a manner that would be efficient, acceptable to federating entities.

“We are are not going to be driven by mistrust and suspicion any longer. If Nigerians want Nigeria to be restructured, that is what we should do because the thing is not working.

“We have to make the State and local government stronger, restructuring needs to be done holistically”.

He however added if given the opportunity to become the president, he will build Nigeria from all walks of life but if he fails to get the PDP ticket, he is ready support whoever becomes the party Presidential candidate.

In his remarks, the PDP Gubernatorial candidate in the last governorship election in Ondo State, Eyitayo Jegede SAN, said whoever wins the PDP primaries, will eventually becomes the next president of Nigeria because any of the aspirants in PDP is capable of the defeating any aspirants of the ruling All Progressive Congress.