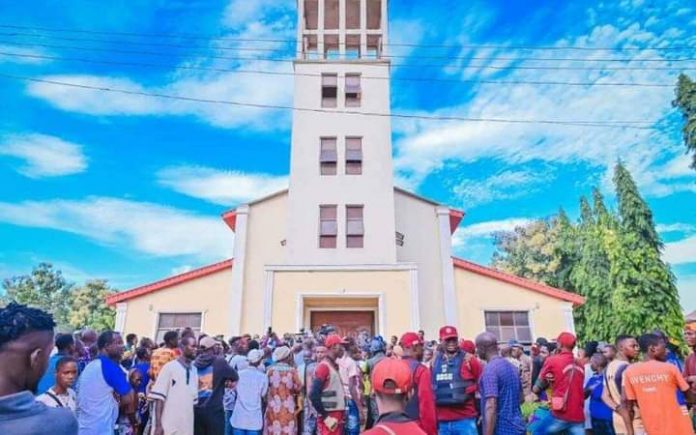 Secretary to Ondo State Government, Princess Catherine Oladunni Odu, has condemned Gunmen attack on worshippers at the St. Francis Catholic Church, Owaluwa Street in Owo, where many worshippers were killed and several others seriously injured.

Dr. Ayokunle Ikusemiju, S.A. to the SSG, Princess Odu in a statement, condoled with families of the victims, Owo community, the Catholic Church and the entire State.

She decried the tragic incident, noting that it is an act of inhumanity to mankind taken to extreme.

“The attack on Catholic church in Owo on Sunday, 5th June, 2022, is terribly inhumane. It is saddened for man to kill fellow man. No doubt, it was a black Sunday in Owo Kingdom and a terrific blow to our dear State. It is disheartening to see children, women and men in agony, while several corpses have been taken to the morgue. I strongly condemn this act by unknown gunmen and I am sure they cannot get away with it. A church is supposed to be a sacred place, where people would feel secured. I therefore condole with the people of Owo, the Catholic church, all victims of this dastard act and the entire State. May God heal our land”, Odu said.

The Secretary to the State Government maintained that the government will do everything possible to hunt and arrest perpetrators of this evil act, while calling on anyone with useful information that could lead to the arrest of the perpetrators to oblige security operatives.

Princess Odu who revealed that Governor Akeredolu will not relent in fulfilling his social contract of securing the people of the State, urged the people of Owo to remain peaceful, by not taking laws into their hands.

As the nation grieves over the recent gruesome massacre of innocent worshippers at the St. Francis Catholic Church in Owo, the Coalition of NGOs in Ondo State has joined other well meaning bodies to commiserate with the Executive Governor Oluwarotimi Akeredolu over the unfortunate incident.

Chairman of the Coalition, Mr Franklin Oloniju, in a statement he personally signed, acknowledged the Governor’s relentless efforts in seeing to it that issues of insecurity in the state are handled with all dexterity as has been his custom which is why the activities of these blood-thirsty gunmen came as a rude shock to the state.

He termed the killings as the most heart-breaking and tragic occurrence and urged that the perpetrators be brought to book to face the consequences of their actions.

To our indefatigable Governor, we say continue to keep your head above waters.

We are confident that this incidence will only embolden you to beef up your high-flying records when it comes to state security issues.

We the entire members of the Coalition of Ondo State Civil Society join hands with you in condoling with the families of the deceased while also praying for the speedy recovery of the injured ones.

We also highly reckon with your adroitness and proficiency over administration which will ensure that perpetrators are found, and justice served.

We appeal to the good citizens of Ondo state not to take laws into their hands but to be vigilante and be quick to report any sort of unusual activities perceived to the appropriate channels as we know that security is everyone’s business.

Similarly, the National Council of Muslim Youth Organizations (NACOMYO), has described the Owo massacre as a challenge of collective spirit for Nigerians.

”This is because it is not the first time a heinous crime of this nature is taking place; it had occurred across board and It is time to stand together more strongly than ever,” NACOMYO stated.

The body’s condemnation is contained in a press release signed by the Ondo State Coordinator of NACOMYO, Alhaji Alli Yekini and his Administrative Secretary Mr. Ajayi Moshood, which was made available the journalists yesterday.

The release said; a break must be applied on this carnage making the priority on the humans first.

It stated that evil do not discriminate but that Love, good neighborliness and mutual understanding are the ingredients needed to live a peaceful life. Not hatred and wanton destruction of lives and properties.

The council condemn this dastard act roundly saying that no right thinking person can justify the massacre.

NACOMYO commiserated with the Christian community, Catholic Church, the Olowo of Owo, Chief lmam of Owo, CAN Chairman in Owo and the entire residents of Owo kingdom over the unwarranted attack on the members of St. Francis Catholic Church Owaluwa Owo, Ondo State.

It also sympathized with every family that sustained one form of loss or the other in the gruesome and cold-blooded attack, praying that God will uphold them and grant them the fortitude to bear the lost.

The council appreciated the various arms of government and stakeholders for their prompt attention to the event, especially the State Governor, Arakunrin Oluwarotimi Akeredolu (SAN).

It appealed that security challenges facing Nigeria should be attended to clinically as it advocated what it described as multi-level approach, encompassing Physical, scientific technology and spiritual options be deployed to surmount the obstacle.

” Our attackers are not coming from another planet, they reside with us in Nigeria. So, all hands must be on deck to fish out, prosecute and punish any offender who is happy in throwing our collective happiness into the mud.

” Those who see nothing good in the existence of their fellow human beings, should be put to where they belong without delay.”

” The security operatives are trying their best but more efforts are still needed to defeat the evil.

Law should be allowed to take its course without fear or favour. It is in doing this that we can rest as a country, so that the coming generation will not see us as uncaring type.

” It is the fervent prayer of this council that such ugly occurrence shall never repeat itself again in our communities,” it stated.

IDSG CONDEMNS ATTACK ON WORSHIPPERS AT ST FRANCIS CATHOLIC CHURCH, OWO, CALLS ON FGN, ODSG TO PUT AN END TO SUCH INHUMAN ACT

Reacting to the horrific news, the Executive Administrator of the apex, Ilaje development-focused organization, Rev. Adesola Adebawo, described the carnage, which involved children, women and men as unwarranted, inhuman, disastrous and a product of degenerate minds and lost souls. He called on the security agencies to expedite steps to bring the perpetrators to book.

In a statement personally signed by him, Rev Adebawo said this killing is one too many, especially now that peace is gradually returning to this South West part of the country through the activities South West Security Network popularly called Amotekun.

According to IDSG Executive Administrator, this heinous crime was deliberately orchestrated and executed by agents of chaos to test the resolve of the Government and people of Ondo State to secure the lives and properties of its citizens.

State, Arakunrin Oluwarotimi Akeredolu to the incident and their charge to all security apparatus to work round the clock to apprehend the perpetrators and their accomplishes and bring them to book .

He called on the citizens of the state especially those living along the boundaries with sister states to be security conscious and not to lower their guards because we are in perilous times and this ugly incident portends a greater danger to come.

While appealing to the good of people of Ondo State especially those in Owo where the incident occurred not to take the law into their hands, the Executive Administrator of IDSG on behalf of Ilaje people home and abroad commiserates with those that lost loved ones and wish the wounded speedy recovery.