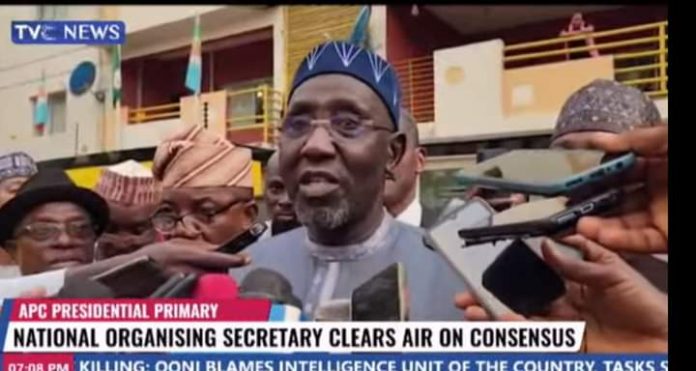 The National Working Committee of the All Progressives Congress (APC) on Monday disagreed over the nomination of a consensus presidential candidate for the party.

This is coming barely 12 hours to the party’s convention holding in Abuja, Nigeria’s nation capital.

The members of the NWC had met Monday in line with the directive of President Muhammadu Buhari, that a consensus candidate should be picked after consultations.

One of the members of the NWC confirmed that the party Chairman, Adamu Abdullahi announced to them that Lawan is the consensus choice of the party but that members kicked against the decision.

It was learnt that the members of the NWC kicked against the decision, leading to a division among them.

However, the President denied anointing any presidential candidate in a meeting with Northern governors on Monday.

Speaking on behalf of the governors, Simon Lalong of Plateau State, said the President clarified that he had no consensus candidate for now.

This is coming against the backdrop of reports that the Senate President was announced as the consensus candidate of the APC.

“We sat down in the last few days and took a decision and gave an advisory. While we were on our way to advise the President, part of our discussions leaked out.

“Mr President, being a democrat, insisted on listening to us. So, he granted us the opportunity today. Our meeting today is to reaffirm our position.

“We apologised to him that the statement (backing power shift to the South) was made by all of us.

“Mr President was happy with our decision. Mr President believes in a democratic process; and that every candidate must emerge through a transparent process.

“The emphasis Mr President made was that for now, there is no anointed candidate, and therefore directed that the Progressive Governors Forum should meet with the National Working Committee of the party to agree.”

The PUNCH had reported that Northern governors of the All Progressives Congress met with the President at the Presidential Villa, Abuja on Monday.

The Northern governors had asked the governing party to zone its presidential ticket to the South on Saturday.

They also asked aspirants from the northern region to withdraw from the presidential race.

A communique issued after Monday’s meeting, read, “After careful deliberation, we wish to state our firm conviction that after eight years in office of President Muhammadu Buhari, the presidential candidate of the APC for the 2023 elections should be one of our teeming members from the southern states of Nigeria.

“It is a question of honour for the APC, an obligation that is not in any way affected by the decisions taken by another political party.”