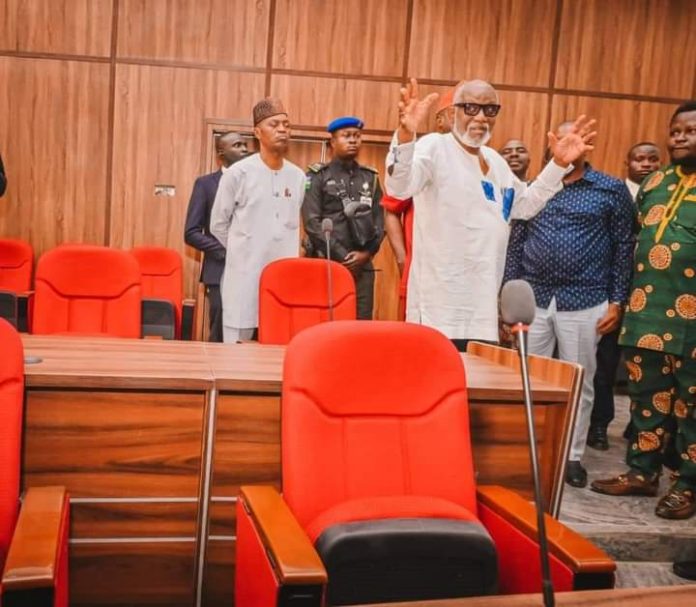 All is set for the commissioning exercise of the Ondo State House of Assembly Complex.

The Complex came under reconstruction following the incident of a Snake which fell from the ceiling of the hallowed chamber during plenary in July, 2019.

Since the incident, the lawmakers have been using a makeshift venue for plenary as reconstruction work sails on at the Complex.

Ondo State Governor, Oluwarotimi Akeredolu, who paid an unscheduled visit to the Assembly Complex on Tuesday, expressed satisfaction with the level of work done.

He described the work as the “reconstruction of the Hallowed chamber” adding that his administration has completely changed the face of the Assembly.

Governor Akeredolu and his entourage were received at the Assembly Complex by members of the House led by the Speaker,Rt. Hon. Bamidele Oleyelogun in a carnival-like manner.

Aside the reconstruction of the Assembly complex, the Hallowed chamber was also equipped with modern facilities and gadgets needed for the legislative functions of the lawmakers.

“This is not my first time of coming here. I am, undoubtedly very happy at the level of the reconstruction. Let me use that word. When you look at the materials that have been used here, they are solid materials that will last for long.”

He noted that since the complex was built over 40 years ago, no administration has ever deemed it fit to do a major renovation on the building until his government took the bold step.

“It will be a thing of pride to us, and I’m sure members of the House of Assembly will be very proud to carry out their functions in a more conducive and convenient environment. The quality of work is something that is up to the standard expected.

“Everything including their offices and the gallery has been put in a better shape, and one is certain that with this, the members of the 9th Assembly will be very proud and can beat their chest that this is done in their time,” Akeredolu added.

In his remarks, the Speaker of the House, Rt. Hon. Bamidele Oleyelogun, who spoke on behalf the Lawmakers, appreciated Governor Akeredolu for giving them a very conducive and befitting hallowed chamber.

According to him, the new face of the hallowed chamber can compete favourably with the best in the country.

The Assembly Complex, was built by the first Executive Governor of the Ondo State, late Pa. Michael Adekunle Ajasin.