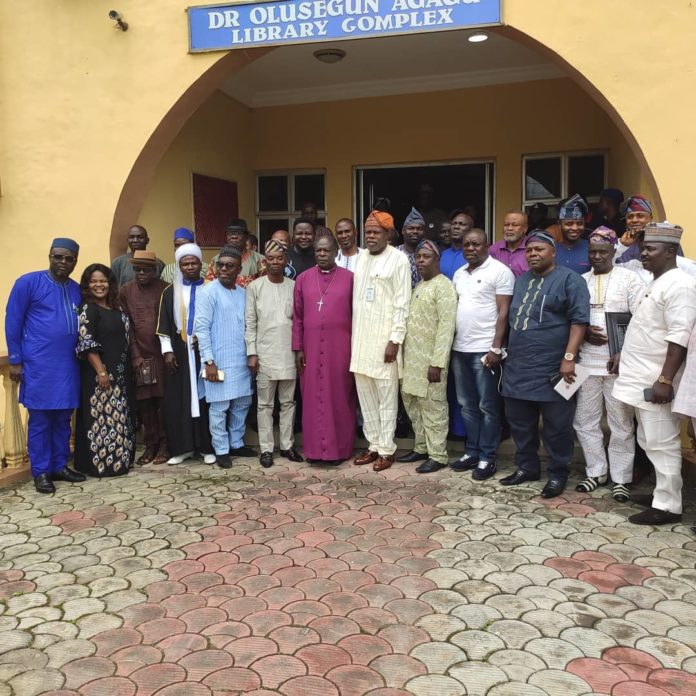 After months of break prompted by the dillapidated state of the Hallowed Chamber, lawmakers of the Ondo State House of Assembly are set for a robust legislative duty.

This followed the inauguration on Wednesday of a makeshift Chamber to be used as a temporary avenue for plenary sessions of the House.

The Clerics who prayed for the lawmakers, the staff and Ondo State government, highlighted the importance of the House of Assembly to the sustenance of democracy.

Bishop Borokini admonished the lawmakers to work in harmony with the executive arm in order to deliver the dividends of democracy to the people.

Speaking on the occasion, the Chief Whip of the House and lawmaker representing Owo state constituency two, Honourable Dr. Adeyemi Olayemi commended the Governor, Arakunrin Oluwarotimi Akeredolu for his timely intervention by facilitating the renovation of the temporary Chamber.

He noted that it would further enhance the performance of their legislative duties.

” We now have a more convenient place to carry out our legislative duties pending the complete and total rehabilitation of the old Structure by the executive arm”, he said.

The chairman House Committee on Information Honourable Olugbenga Omole while addressing the press noted that the House was not in limbo as insinuated in some quarters.

He maintained that while the renovation of the temporary Chamber was on , members were busy with other legislative assignments such as Committee meetings and oversight functions.

Honourable Omole called on the executive to fast track the rehabilitation of the old Hallowed Chamber to place it in a better stead for the performance of their legislative assignments.

The lawmakers suspended all legislative duties in the old Hallowed Chamber sometime in July this year following the dillapidated state of the structure.

The state government came to the rescue by renovating a space in the assembly complex to temporarily facilitate execution of legislative activities pending the rehabilitation of the old Structure.