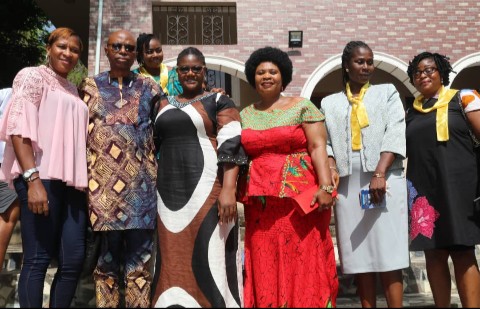 The funeral ceremonies of late Mama Muyinat Mimiko will hold on the 20th and 21st of February 2020 in Ondo city.

Former Governor of Ondo State Dr. Olusegun Mimiko announced this when the association of professional women groups in Ondo State paid him a condolence visit in his Ondo Country home.

The former Governor who was passionately touched by the demise of his late mother, spoke glowingly about her developmental impact in her community and beyond as well as positively touching lives saying that she will be greatly missed.

Dr. Mimiko said, the role of women as catalysts for the social economic development of the society is strategic and therefore, makes them indispensable.

Both the former Governor and his wife appreciated the professional women groups for their visit and commended them for their role in the development of Ondo State.

READ ALSO: I Have No Political Relationship With Mimiko – Akeredolu

The president of the association, Mrs Lola Adewunmi assured the Mimiko’s of the women’s support at anytime and prayed God to grant them the fortitude to bear the loss of their matriarch.

Both the former Governor and his wife appreciated the women for their visit and commended them for their role in the development of Ondo State.