Precision
Home World US To ‘Release’ 5,000 Prisoners To The Talibans In New Peace Deal 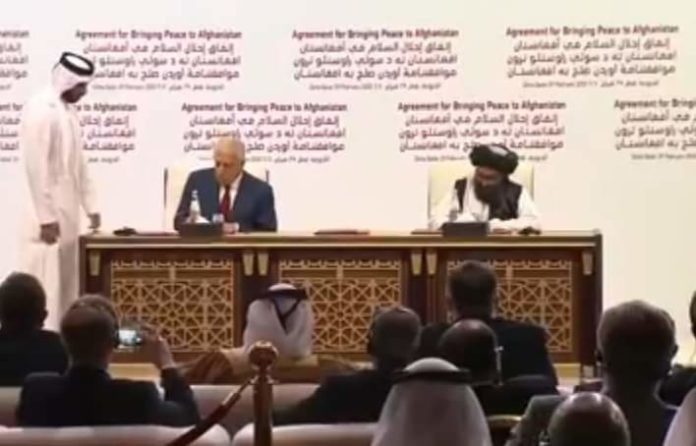 The United States of America has signed a peace deal with Afghanistan’s Taliban, a move to end America’s longest-fought war.

In the agreement, the Taliban called for the release of 5,000 of its members detained by US and 1,000 “prisoners of the other side” on the first day of intra-Afghan negotiations.

Zalmay Khalilzad, the chief US negotiator in the talks with the Taliban, and Mullah Baradar, Taliban’s chief negotiator signed the agreement in Doha, Qatar, on Saturday.

Mike Pompeo, US secretary of state, also witnessed the signing of the peace deal, which was done after 18 months of talks.

READ ALSO: Amnesty For Boko Haram: Is Nigeria Looking The Way Of Colombia?

Both sides have been at war since 2001 when US invaded Afghanistan weeks after the 9/11 attacks in New York by al-Qaeda, the radical group, then based in Afghanistan.

The agreement signed in the presence of leaders from Pakistan, Qatar, Turkey, India, Indonesia, Uzbekistan and Tajikistan, will pave the way for the gradual withdrawal of US troops from Afghanistan with 8,600 troops withdrawing within the first 135 days.

The peace deal titled “Agreement for Bringing Peace to Afghanistan” laid out a 14-month plan for the withdrawal of “all military forces of the United States, its allies, and Coalition partners, including all non-diplomatic civilian personnel, private security contractors, trainers, advisors, and supporting services personnel.”

The four-page agreement states that the Taliban will take steps “to prevent any group or individual, including al-Qa’ida, from using the soil of Afghanistan to threaten the security of the United States and its allies.”

It also states that the Taliban “will start intra-Afghan negotiations with Afghan sides on March 10, 2020.”

Addressing journalists at the event, Pompeo said the deal is the first major step to ending the war, adding that more work needs to be done.

“This is a hopeful moment, but it’s only the beginning. There’s a great deal of hard work ahead on the diplomatic front,” he said.

“The US will closely watch the Taliban’s compliance with their commitments, and calibrate the pace of our withdrawal to their actions. This is how we will ensure that Afghanistan never again serves as a base for international terrorists.

“If the Taliban do not uphold their commitments, Trump and his team will not hesitate to do what we must do to protect American lives.”