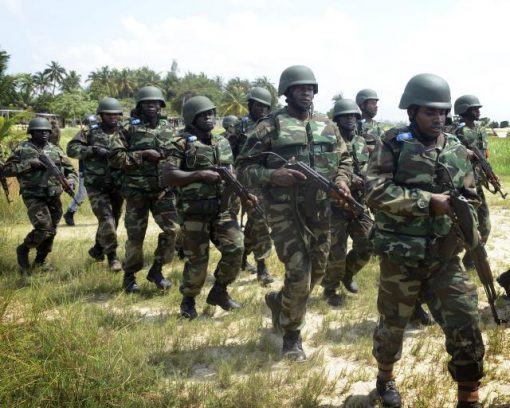 The Nigeria Army has called on all head of security agencies in Ondo State to cooperate more with the Army in other to reduce the rate of insecurity in the state.

The theme of the workshop is ” Mutil-Agency Approach In The Digital Age: The Nigerian Security Agencies in Perspective”

Omozoje, who explained it has become imperatives for all security agencies in the nation particularly in Ondo State to work together and ensure security was maintaining said that the issue of kidnapping and killing should be curtail in the state.

“We are all players of the same thing and so when we synergy, when we work out together, we are better able to fulfill our mandate.

“We archieved better results because we are cooperating, we are collaborating and that means there is no gaps. But, if we work independently, if we work without this ingredients I mentioned, definitely, we are going to have gaps.

“And definitely, we not be able to archive our various mandates,”he said.

The GOC, who said that the head of the security agencies in Ondo State had agreed to step up their operations promised that the insecurity in the state would became the issue of pass where the law abiding citizens could go about their normal affairs without any fair.

We have come to an agreement to step up our operation within the state. we will put a stop to the activities of this criminals.

In the pass few days, we had incidents of kidnapping, killing and the like.
We would not surrender society to the criminals and that means we have to come out and come out fully.

While speaking on the workshop, Omozoje said that at the end of the lecture the security agencies would come up with the new ideas better ways of working together to ensure that security was maintaining.

“You have to exact leadership and take back the space from those criminals who are roaming wild and ensure that criminals arrested and they face the full wrath of the law,” he said.

Also speaking, Brig. Gen. Abubakar Zakari the commander 32 Artillery Brigade who, said that the society had been polarized ever than before said the people were now witnesses such of insecurity in the nation and Ondo State in particular.

According to him, the recent effect of kidnapping and killing in the state will not be unconnected with the large arms in circulation as a result of recent election and #Endsar saga

“Therefore, the lecture as come as right time the Nigerian Army in other to curtail criminality launch the exercise crocodile smile VI and Army know the important of inter-Agency that is while they organise this lecture among the security agencies,” he said.

Gov. Oluwarotimi Akeredolu of Ondo State who was represented by his Special Adviser on Security, Mr Jimoh Dojumo appealed to security agencies to put more effort to curtail the rate of insecurity in the state.

“The issue of insecuriy in the state was part of aftermath of EndSars and there is no senatorial districts that left out especially the one that happened black Thursday sincerely is more than disturbing.

“And we are ready to support and contribute more in whatever way the issues of insecurity in Ondo State is totally eradicated or brought to the end,”he said.

The News Agency of Nigeria reports that the head of security agencies present at the workshop are Police, DSS, FRSC, NSCDC, NDLEA, Customs, Correctional services, and among others.