Precision
Home Politics Osun Politics: Aregbesola Has No Reason Not To Support Me – Oyetola 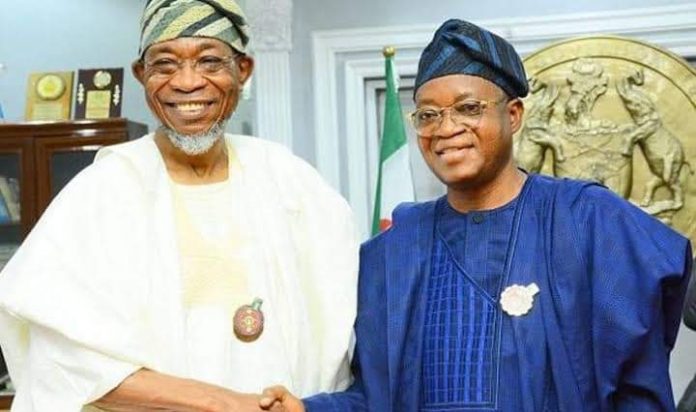 Governor of Osun State, Adegboyega Oyetola says those parading themselves as members of The Osun Progressives, TOP, are not speaking the mind of his predecessor and Interior minister, Ogbeni Rauf Aregbesola.

He further said that having worked for the success of his predecessor for eight years, there was no reason Aregbosola would not support him.

Oyetola made these known at the weekend while featuring on a Live Radio Interview as part of activities to commemorate the 30th Anniversary of the creation of Osun.

Specifically, the Governor was asked regarding the activities of some chieftains of the party parading themselves as TOP and claiming to be Aregbesola’s loyalists.

The group had in recent times given indication that its members were likely not to endorse the Governor for another term.

But the Governor said, “Well, those people — I’m not too sure that the people that have been saying that are saying his mind. I believe he is my brother and I believe at any point in time, he wants my success because I worked very hard for eight years for his own success as well.

“If people are saying that (that they won’t support me) I’m not too sure they are telling the story from his own heart. He remains my brother. They are not speaking his mind. Like I said, I don’t see why he would not be willing to support me if the people say they want me.”

Oyetola further said: “Talking about issue of second term, my attitude is to deliver on what I am currently doing. I don’t want to be distracted. It is service to the people. If the people believe that they want me to continue, so be it. It is not a desperate situation.

“However, we have not gotten to that level (election). It is God that gives power. His appointment is not negotiable. It is God’s wish that I am the Governor today. So, the issue of second term is left to God and the people of Osun to decide.”