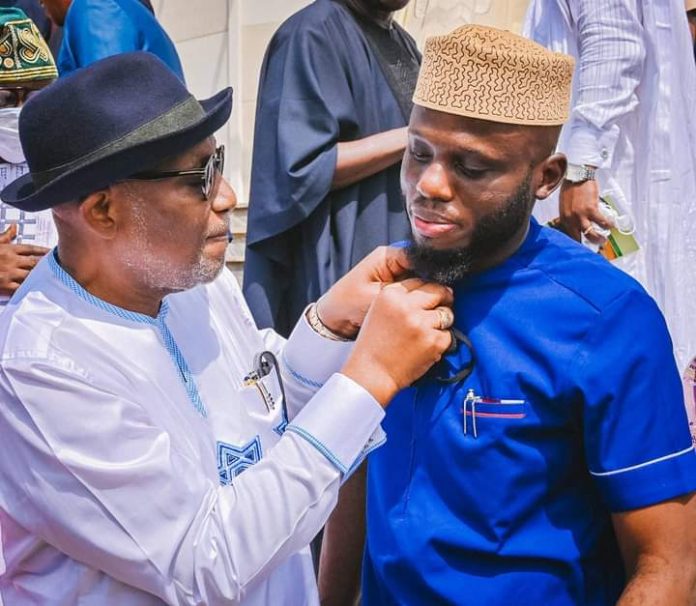 If the looting of Ondo State treasury continues the way it is going on presently, the people will chase Akeredolu and his family out of the Government House very soon.

This was the prediction of Ondo State PDP publicity secretary, Kennedy Ikantu Peretei in his new year message.

Peretei who in 2021 commenced a series titled, “Akeredolu’s misrule in Ondo State”, stated that, “every passing day in Ondo state, one is confronted with the reality that, there is a very slim possibility of Mr. Rotimi Akeredolu, Governor of Ondo State and his All Progressives Congress to completely serve out his remaining tenure.”

He said his speculation is fueled by the financial recklessness, brazen lack of respect for rules by Akeredolu’s wife Betty, his son, Babajide and lately his daughter, Teniola and her husband Michael Olatunde.

“Immediately Akeredolu was sworn in as Governor of Ondo State in 2017, he registered about thirteen companies. These companies have been shamelessly used by the first family to receive contracts from state ministries and departments. Checks from the Corporate Affairs Commission, Abuja, showed that all the companies have the same or related Directors and Secretary. When contractors in the state hardly get paid for jobs, those awarded to the first family get prompt payment and to rob salt on injury, they and some of their cronies brag about it.

“A few months ago, the Ondo State government placed embargo on all forestry activities. This was done so as to hand over all forest operations to Babajide Akeredolu. When the operations were restored, a new sherif was already in town. One Ilesanmi Brainbox was mandated to collect a handsome sum of five hundred thousand Naira (N500,000.00) from the operators everyday and paid directly to Babajide’s bank account. Even if Ondo State was a territory conquered by Akeredolu, he should have acted with some modicum of decency.

“The widely advertised and celebrated Sunshine Countdown Concert was anchored by Micheal Olatunde, Akeredolu’s son-in law. The Ondo State Ministry of Information parted with a whooping five hundred million Naira (N500,000,000.00) of taxpayers money. There was no committee set up for the event, no State Executive Council approval was gotten for it. Just hurriedly put together to patronise Teniola, Akeredolu’s daughter. Everywhere you look in the state, what you find is Akeredolu, his wife, children and their spouses as though on rampage, looting blindly.”

Peretei said it is shocking that the world of grandeur and opulence in which the Akeredolu family live is in direct contrast with the lives of the people of the state.

“Retired workers of the state owned Owena Press Limited, publishers of Hope Newspaper, had recently in an emotional letter addressed to the Governor over the weekend, appealed for the payment of their gratuity. In the words of former Editor of The Hope, Dr. Banji Ayoola, “I can tell you that six of our members including a former Head of features desk, two photographers, a gateman, and two drivers have died of sicknesses that could be easily treated if money had been available, while some are bed ridden and unable to help themselves. Notably, six of the company’s 37 former staff have died without their gratuity”.

“Around the same time, workers of Rufus Giwa Polytechnic, Owo took to the streets, protesting 13 months of unpaid salaries. The workers lamented that, while they were hungry, Akeredolu and his cronies were erecting new buildings in Owo, right before their eyes. In the same South West Nigeria, Oyo State Workers got thirteenth month pay in the month of December. The explanations of lean resources of the state can no longer suffice.

“Mrs Betty Akeredolu, on her part has ensured that, no board is constituted for the Ondo State Oil Producing Areas Development Commission (OSOPADEC). All the BEMORE and FOWOSO projects are fully funded by OSOPADEC. Short of directly signing cheques, Betty is the Alpha and Omega of OSOPADEC. The Commission has not executed a single project since the inception of the Akeredolu tenure. While the eighteen local government areas of Ondo State contributed eighteen million Naira for 3rd FOWOSO Summit last month, OSOPADEC paid Betty more than fifty million Naira for the Summit. Only a heartless person can undertake this kind of blind looting in the face of penury that is everywhere.

“The greed displayed by the first family and their cohorts is only reminiscent of Ali Baba and the forty thieves, a folk tale from the One Thousand and One Nights, added to the collection in the 18th Century by French Translator Antoine Galland,” Peretei said.