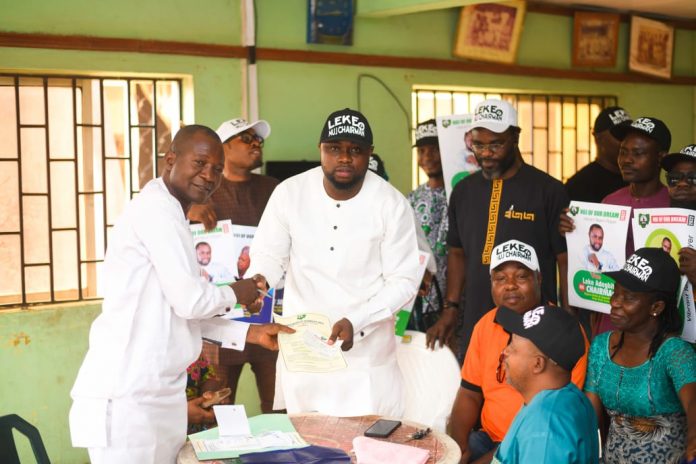 Adeleke Adegbite, the Outgoing General Secretary of the Nigeria Union of Journalists, NUJ, Ondo state council has officially expressed his intention to contest the post of state Chairmanship of the Union.

Leke Adegbite, a journalist from the Federal Radio Corporation of Nigeria, (FRCN) Positive FM Chapel declared his intention after picking his Nomination Form from the Credentials Committee on Friday at the Akure NUJ press center.

Other contestants under the UNITY CAMPAIGN TEAM that obtained their nomination forms alongside Adegbite included, Hakeem Gbadamosi of Correspondents’ chapel as Vice Chairman for second term;  Meshack Olaoluwa of State Information chapel as the State Secretary and Ngozi Aduloju of Federated chapel as Assistant Secretary.

Speaking after obtaining his nomination form, Leke Adegbite sought the support of NUJ members across the 11 chapels to actualise his vision of giving the union fresh ideas.

The Director General of the Unity Campaign Team, Reverend David Akinnadewo; Co-DG, Babatope Okeowo and the Team’s Secretary, Sina Adeyeye were on ground to present the Aspirants to the public at the event.

The NUJ electoral committee had set 18th March, 2022 as the date of election.

Leke Adegbite, winner of many professional awards including the Best Journalist of the Year (2021) as his versatility in journalism profession has earned him many honours and awards.

Adeleke, an Alumnus of the Federal Polytechnic, Bida in Niger State; Adekunle Ajasin University, Akungba-Akoko and University of Ibadan, had attended many professional courses, seminars and training workshops including Basic Journalism Course at FRCN Training School (now National Broadcasting Academy, Lagos) to boost his journalism expertise, while his profession has taken him to more 33 States of the country and the FCT as well as travelling outside the country.

Adeleke has covered virtually all sectors of human endeavours especially in Ondo state.

As an outstanding Journalist, Leke Adegbite has records of breaking, investigating and reporting many news stories/reports considered no go area by some, while his journalism experience cut across coverage and assigned as the Radio Nigeria Correspondent at the Ondo State Government House, Ondo State House of Assembly, Judicial Reporter at all Ondo state Election Petition Tribunals since 2007 till 2021.

Adeleke was elected the General Secretary of Nigeria Union of Journalists, NUJ, Ondo State Council in October, 2014 and still holding the position till date after he won his second term election unopposed, while he is also a two term Financial Secretary of the Ondo State Public Service Joint Negotiating Council (JNC) from 2017 to 2022.

Adeleke is a member of some professional bodies including NUJ,  Online Media Professionals of Nigeria; Fellow of the Society for Peace Studies and Practice (SPSP) and Alumnus of International Press Centre (IPC).

SOME OF ADEGBITE’S AGENDA FOR ONDO NUJ;

….. ENROLMENT OF MEMBERS FOR NUJ LIFE INSURANCE SCHEME IN PARTNERSHIP WITH NATIONAL SECRETARIAT