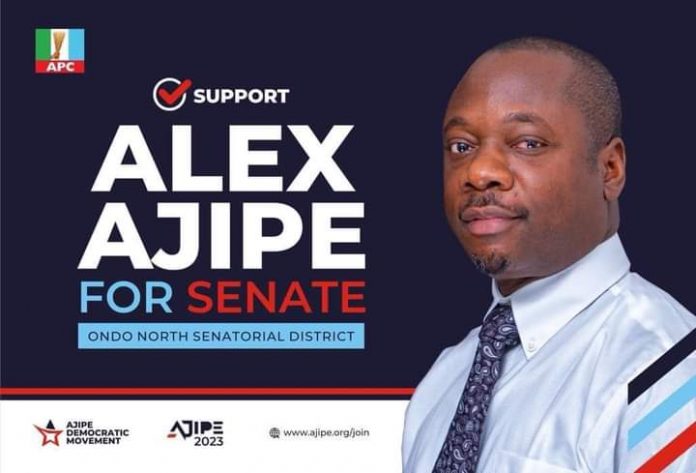 A socio-political group, Ondo North Progressives (ONP), has condemned prominent lawyer and activist, Tunji Abayomi, over his comments on the declaration of an Owo indigene to contest the senatorial district election in 2023.

However, in his reaction to the formal declaration by the investment expert, Chief Ajipe, to contest the Ondo North senatorial election, Abayomi, who is the chairman of the Governing Council of the state-owned Adekunle Ajasin University, Akungba Akoko, condemned the move.

In his comments, he insinuated that an Owo indigene should not participate in the election because, according to him, an Owo man, Oluwarotimi Akeredolu, is the Governor.

He said: “On politics of North Senatorial Zone: To the best of my knowledge there has never been any major conflict between Akoko and Owo in the pursuit of shared political offices within the three Federal Constituencies of Owo, Akoko South and Akoko North. Akoko has always massively supported Owo just as Owo has often supported Akoko under the firm understanding that when Owo has the Governor, one of the Akoko Constituencies is entitled and must have The Senator and vice-versa.”

But reacting to Abayomi’s comments, ONP through its spokesman, Adebayo Alonge, accused the activist and lawyer of being economical with the truth.

In a statement, copy of which was made available to newsmen in Akure, the group said: “The noise generated by the formal declaration of Chief Alex Ajipe to contest for the Ondo North Senatorial seat in the 2023 general elections is both surprising and disturbing.

“The noise is disturbing because of the source of the major and loudest noise is being made a man who we believe should understand. It is even more unfortunate that the noise is coming from latter day self-styled Akoko irredentists who have suddenly realised that their love for Akokoland is unparalleled.

“Respected lawyer, activist and politician, Tunji Ababyomi, in his own narrative on the matter wants us to believe that Akoko and Owo, like siamese twins, have never had any major political conflict. The simple interpretation of this is that Akoko and Owo have always supported each other’s ambitions in elections.

“For him, therefore because an Owo man is governor, it becomes a taboo for another Owo man to contest for a sentorial seat. He said: “Akoko has always massively supported Owo just as Owo has often supported Akoko under the firm understanding that when Owo has the Governor, one of the Akoko Constituencies is entitled and must have The Senator and vice-versa.”

“But this is where history comes in. And it is common knowledge that the beauty of history is that it records today’s events for future refencces and vice-versa. It is therefore imperative that we remind Uncle Tunji Abayomi of some very recent history in which himself was an active participant.

“Now, the question for Tunji Abayomi and others must answer is this: Would Senator Borroffice have relinquished his senatorial seat if any of the five aspirants have won the governorship election? It is important here to state that Dr. Abraham had pursued his case against Governor Rotimi Akeredolu, an Owo indegene, up to the Supreme Court in his bid to become the governor.

“In 2003, an Akoko son, Chief Adebayo Adefarati, a member of the Alliance for Democracty (AD) was the governor of the state. He was running for second term. But surprisingly, even before the whistle for the election to start was blown, the odds were highly stacked against him. His kinsmen, Baba Alli Olanusi Victor Olabimtan were prominent members of the opposition Peoples Democratic Party (PDP).

“While Olanusi was the chairman of the PDP, some renegade members of the AD, sponsored by a prominent Akoko son formed factional group, code-named AD Authentic and alligned with the PDP to oust Adefarati. That same year, Victor Olabimtan was elected into the state house of assembly on the platform of the PDP.

“Perhaps more importantly, between 1999 and 2011, a period of 12 years, three different persons from Owo and Ose local government areas were senator. And between 2011 and 2023, another period of 12 years, an Akoko son would have been senator for the zone.”