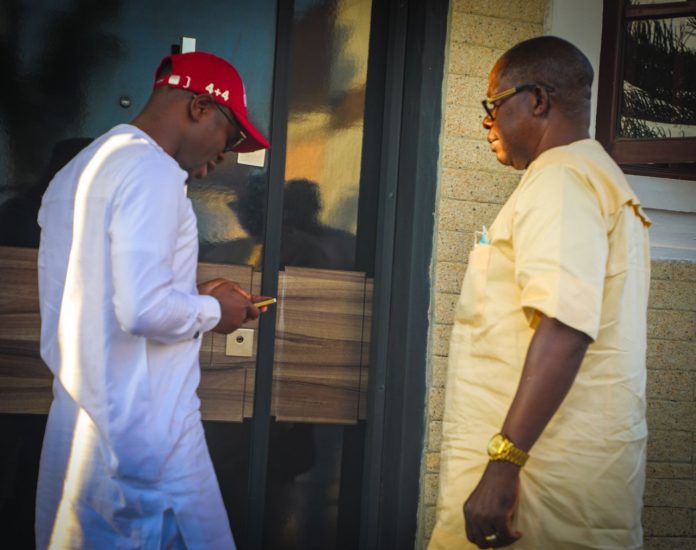 Bakare stated this while Adefisoye paid him a courtesy visit at his Ilara-Mokin residence on Monday.

The host showered praises on Small Alhaji for his grassroots support and peaceful conduct throughout the frustrating period at the primary election’s venue.

Meanwhile, Small Alhaji in turn commended the uncommon spirit of sportsmanship displayed by Hon. Bakare before, during and after the primary election.

He described Bakare as a good democrat, gentleman and God fearing person who does not believe that election must be seen as ‘do or die’.

Adefisoye further counseled that the three aspirants that contested the APC House of Representatives ticket, as well as the party leaders and members were indeed the primary election winners.

He however harped on the need for the three contestants to close ranks and eschew bitterness in the overall best interest of their federal constituency.

“I am here in Ilara-Mokin today with my entourage to pay my elder brother, Hon. Moshood Bakare a courtesy visit. I will like to particularly appreciate him for the excellent spirit of sportsmanship that he displayed before, after and while the primary election lasted. He is no doubt a true democrat and he will continue to earn my utmost respect.

“Frankly speaking, the primary election has come and gone and we all are the winners. What is expected of us now is to close our ranks and eschew bitterness. We all also need to work together so that we can together achieve victory for our party in the overall best interest of our federal constituency”, Adefisoye advised.

It would be recalled that the APC House of Representatives primary election for Idanre/Ifedore federal constituency was held last week Friday at the Premier Hotel in Igbara-Oke, Ondo State. Hon. Tajudeen Adefisoye won the election with 70 votes and Hon. Moshood Bakare came second with 6 votes while Rt. Hon. Bamidele Oloyeloogun came third with 3 votes.